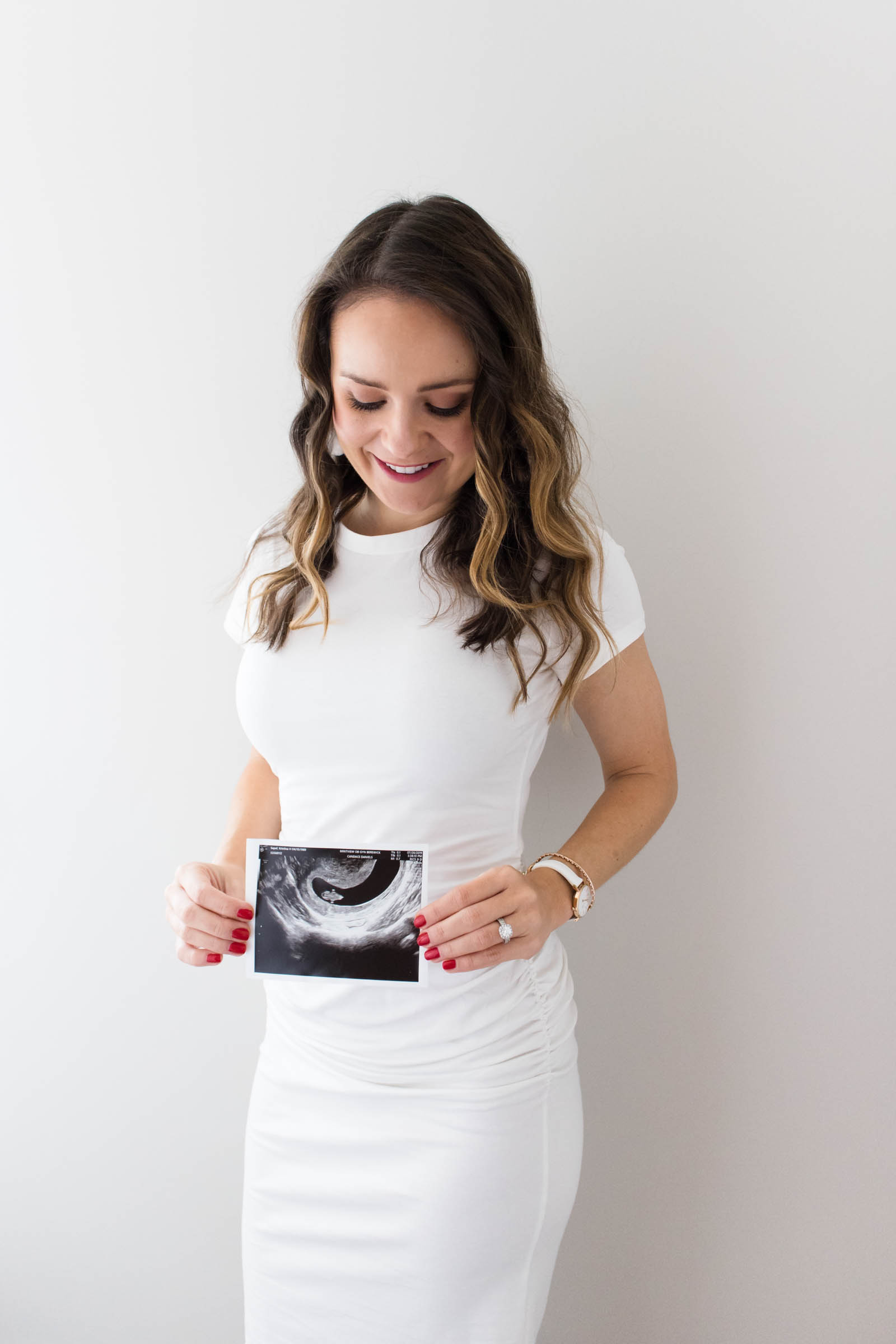 Now that I’m officially an expectant mama, I thought it was time to catch you guys up on the first trimester of my pregnancy in my first bumpdate!! Don’t worry, I do not intend for this to become a “pregnancy blog” but will share some of the big milestones. I mean… it’s our first baby and we’re excited!!!

When did you find out?

Crazy to say but I didn’t find out until I was about 7 weeks pregnant! I stopped my birth control in the beginning of May and never got a normal cycle. I knew it might take up a few months to get pregnant and had been tracking my ovulation until the first few days of our Greece trip but no luck (but I also didn’t check every single day). I didn’t get my cycle at the end of June but chalked it up to traveling overseas because that has happened before. Mid-July came around and I randomly decided to take an ovulation test which was positive… and was still positive 5 days later so I knew something was up! The day after that I took a pregnancy test and it was positive!

Fun fact: I actually got to see our baby on my very first confirmation appointment! Since I had no clue what to tell them when they asked for my LMP, my OBGYN brought in the coolest handheld doppler and bam- there was a baby in there (it’s the little blob on the right, haha)! We actually saw the heartbeat on this so my doctor said I was at least 7 weeks! 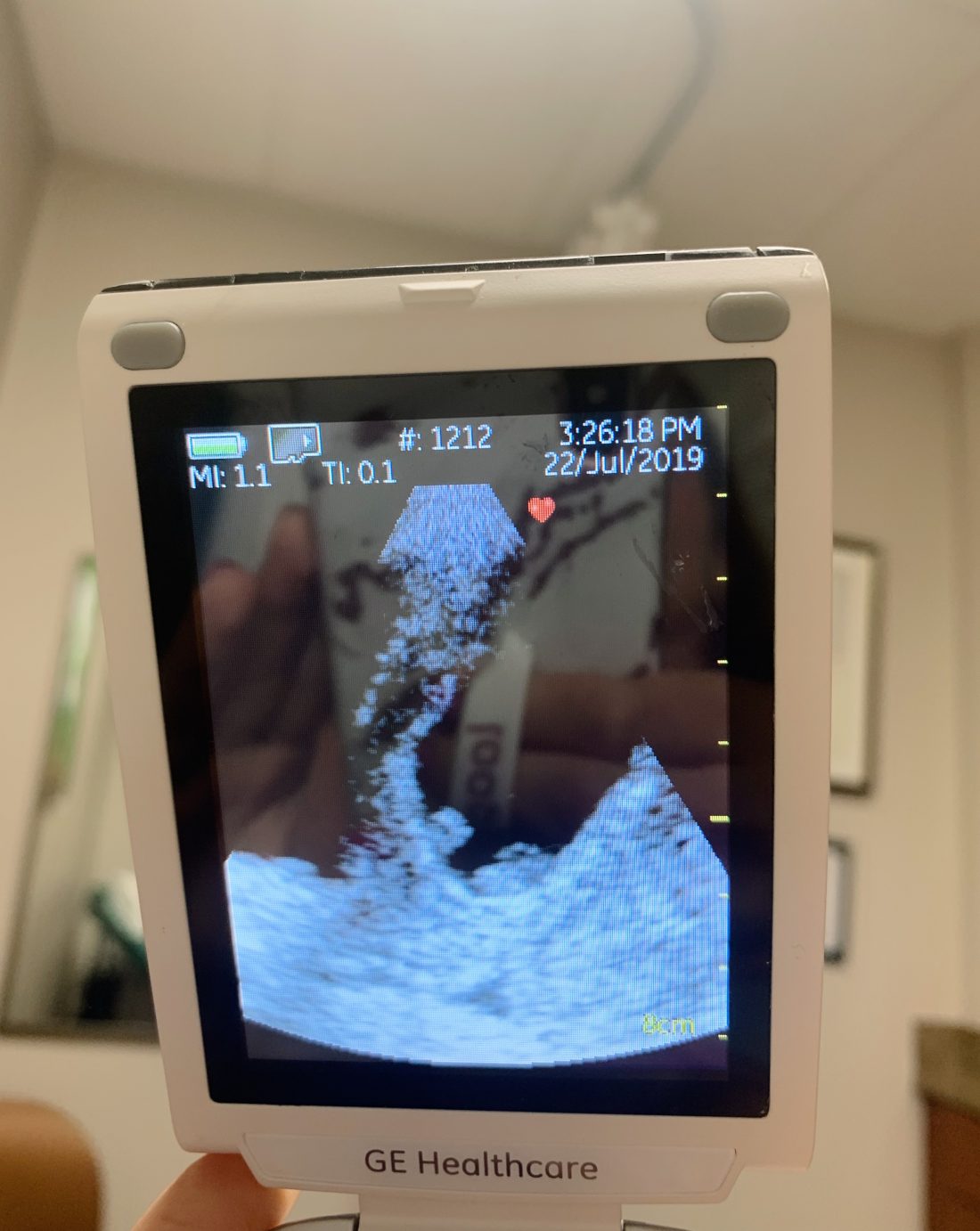 How did you tell your husband?

I took the pregnancy test that morning and knew I wanted to do something cute to tell him so I ran out to a local baby store and picked up a monkey “lovey” because we love monkeys. I had it wrapped up and we were planning to meet at the new house after he got off work so I got there early and put it on the floor of the room we have deemed the future nursery. He was wondering what was going on but I said it was an early housewarming present. After he opened it, he was like “you’re already pregnant?!” He was shocked to say the least but so happy!!

How did we tell our families?

We found this super cute onesie from Amazon that said “hello grandma & grandpa” and wrapped it up and had all of our parents open it (one on FaceTime!) and it was so sweet!! Many tears of joy for a new grandchild! 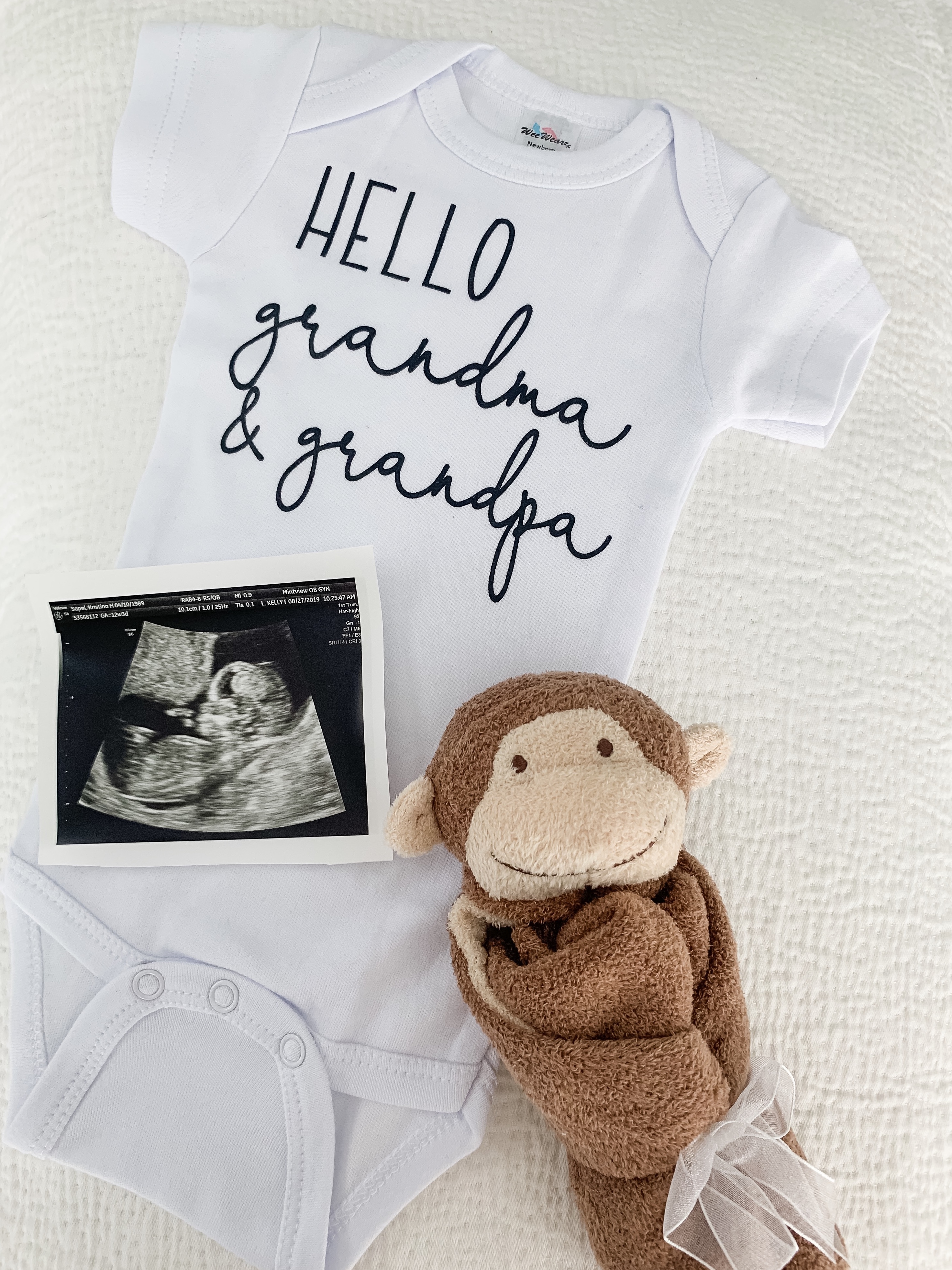 Have you always known you wanted children?

Yes! Ryan & I always talk about our future kids and what they will be like. We knew this year would be the year to grow our family and while we are definitely nervous as first time parents, we know it will be such a great adventure. I will say though, I am not one of those people “who was put on this planet solely to be a mother” BUT know my life wouldn’t be complete without a child. 🙂

How are you finding out the gender so soon? 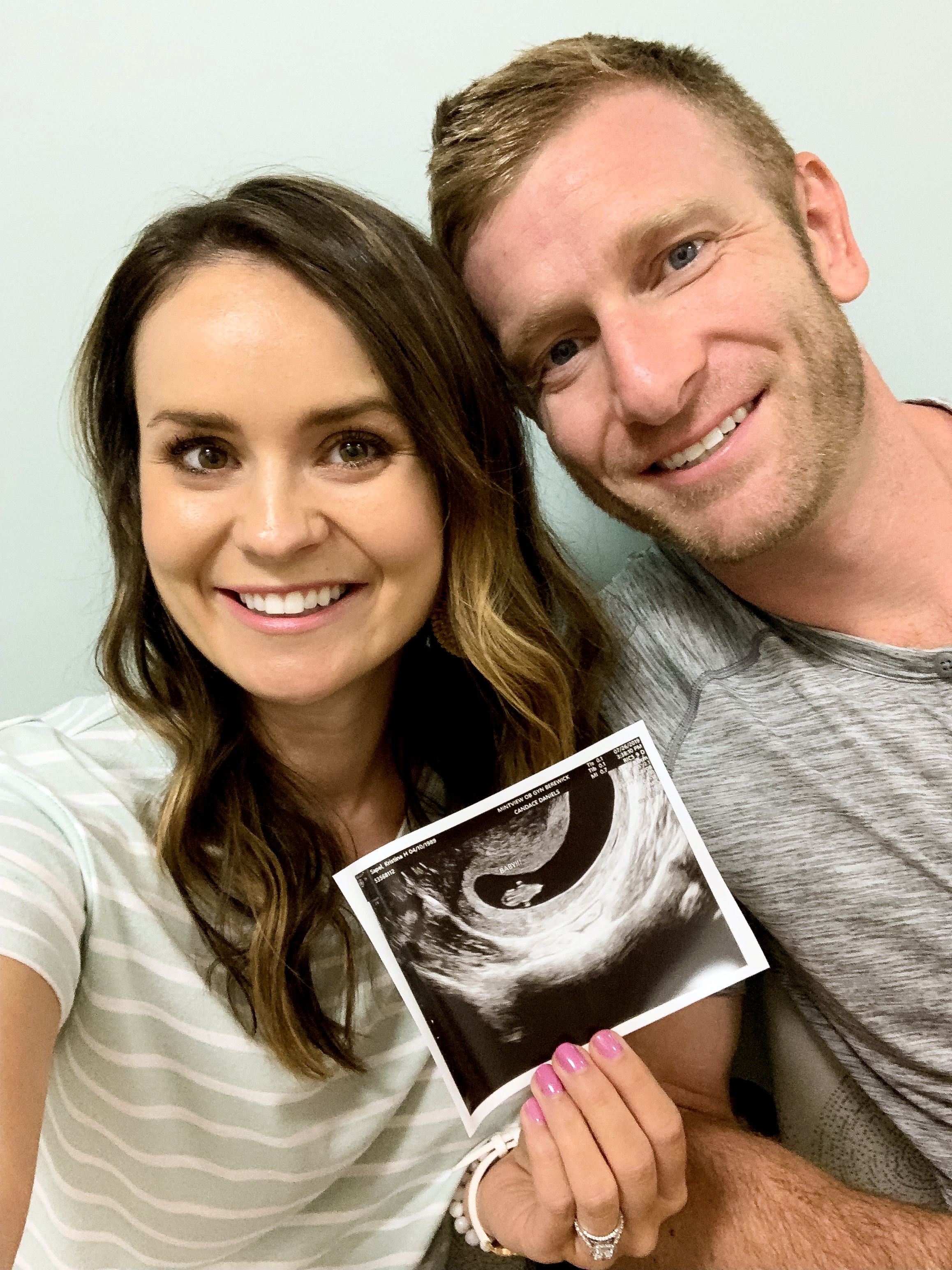 Do you have any food cravings or aversions?

No but, does craving a glass of wine count? Haha. I do miss those the most! But I am seriously the least picky eater you’ll meet and nothing has changed. I am still eating anything and everything I did before I was pregnant.

Have you had any morning sickness?

No and I am so, so thankful for that!! This is also part of the reason I had no clue I was pregnant until so late. Luckily I have had a good amount of energy and have been able to keep working out too. Sometimes I felt like, “is it really in there?” but all I can hope for is a happy, healthy baby. As far as other symptoms, there were some lower abdominal cramps, backaches, and some serious bloating toward the end of the 1st trimester but those have mostly subsided by now! 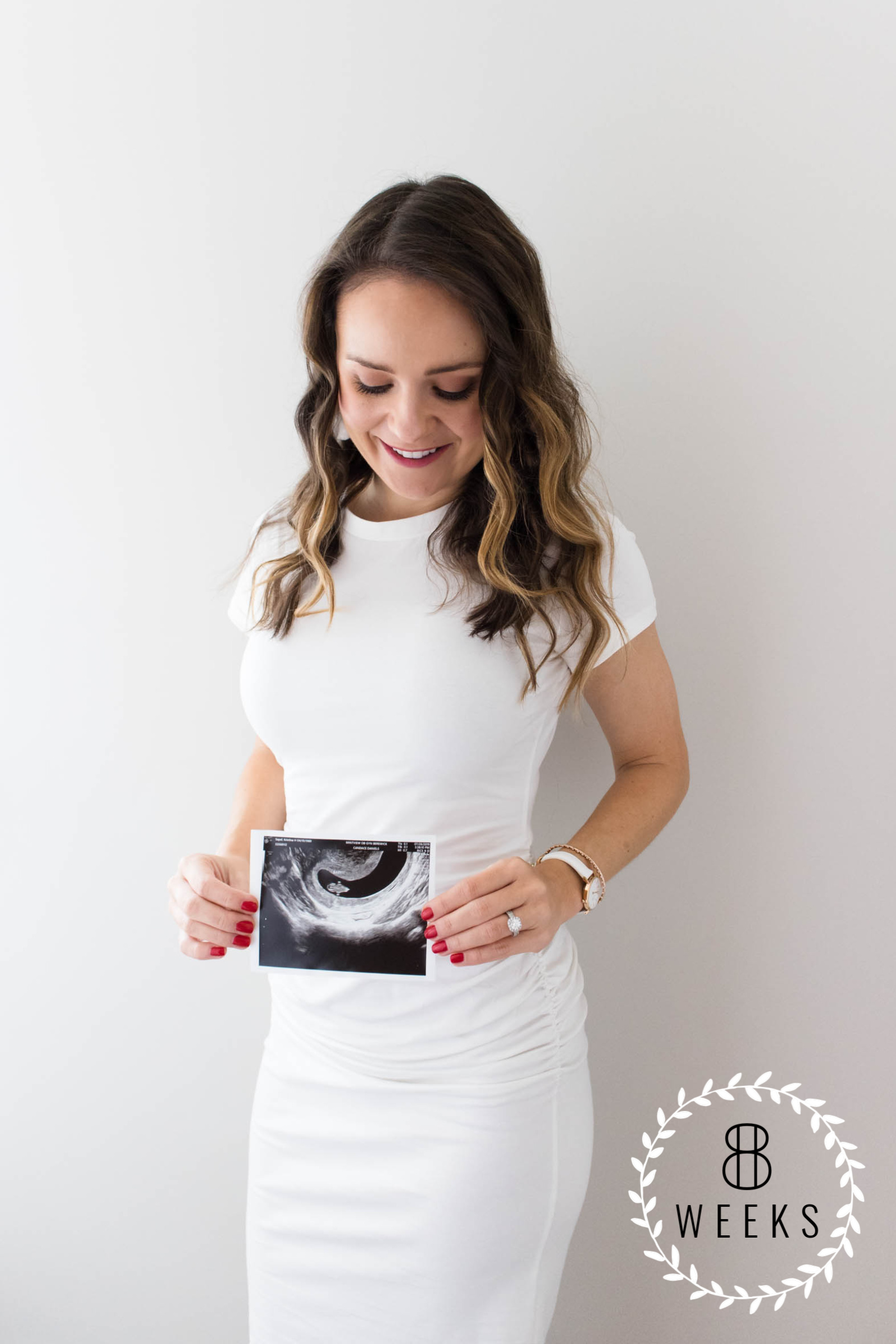 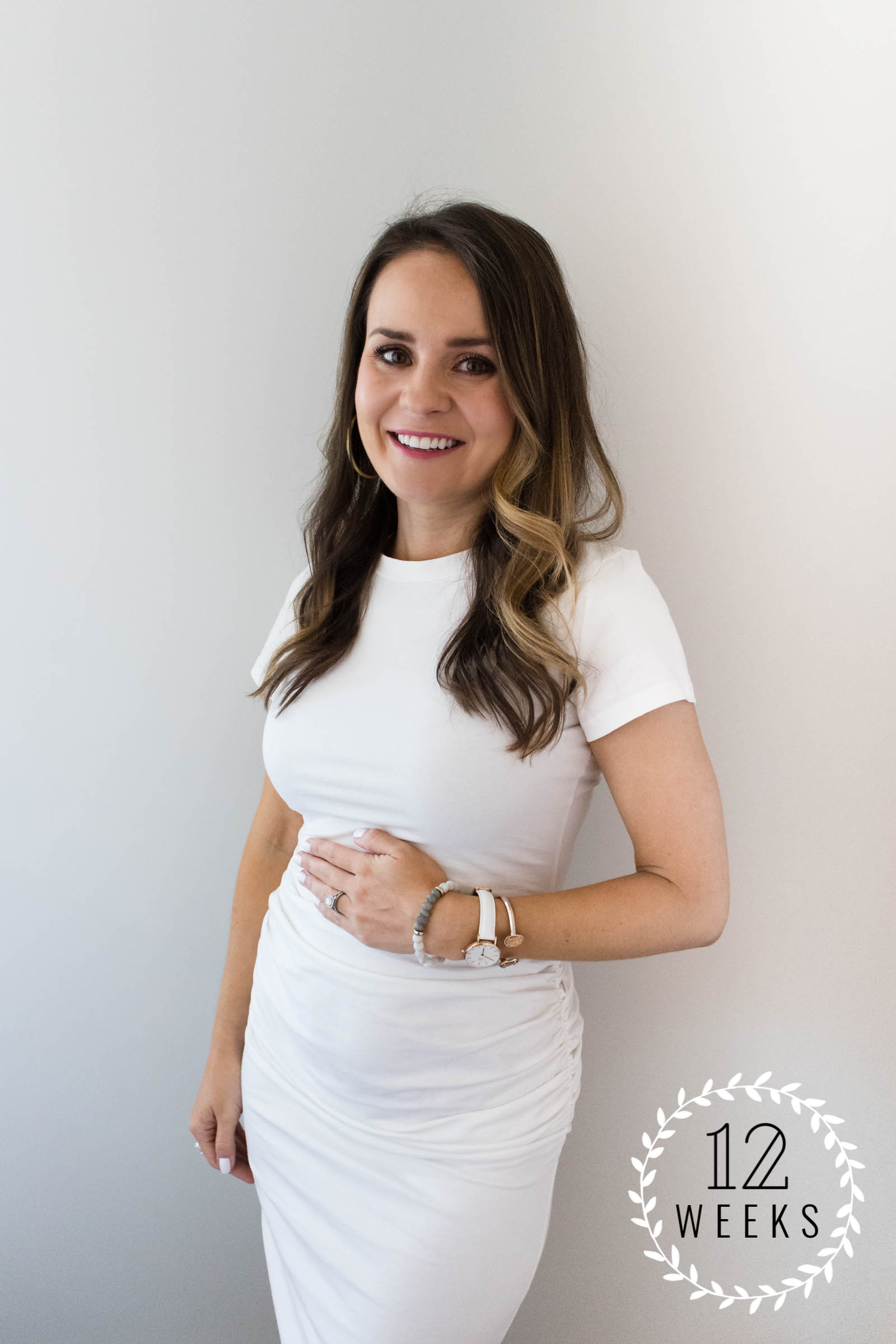 We are so excited for this journey and I will definitely be reaching out to you moms for lots of advice. I haven’t even thought about registry items or nursery decorations, but now that I’m in the second trimester it’s probably a good time to start! Thank you guys for all the love for our announcement and I’ll be sharing more updates soon!