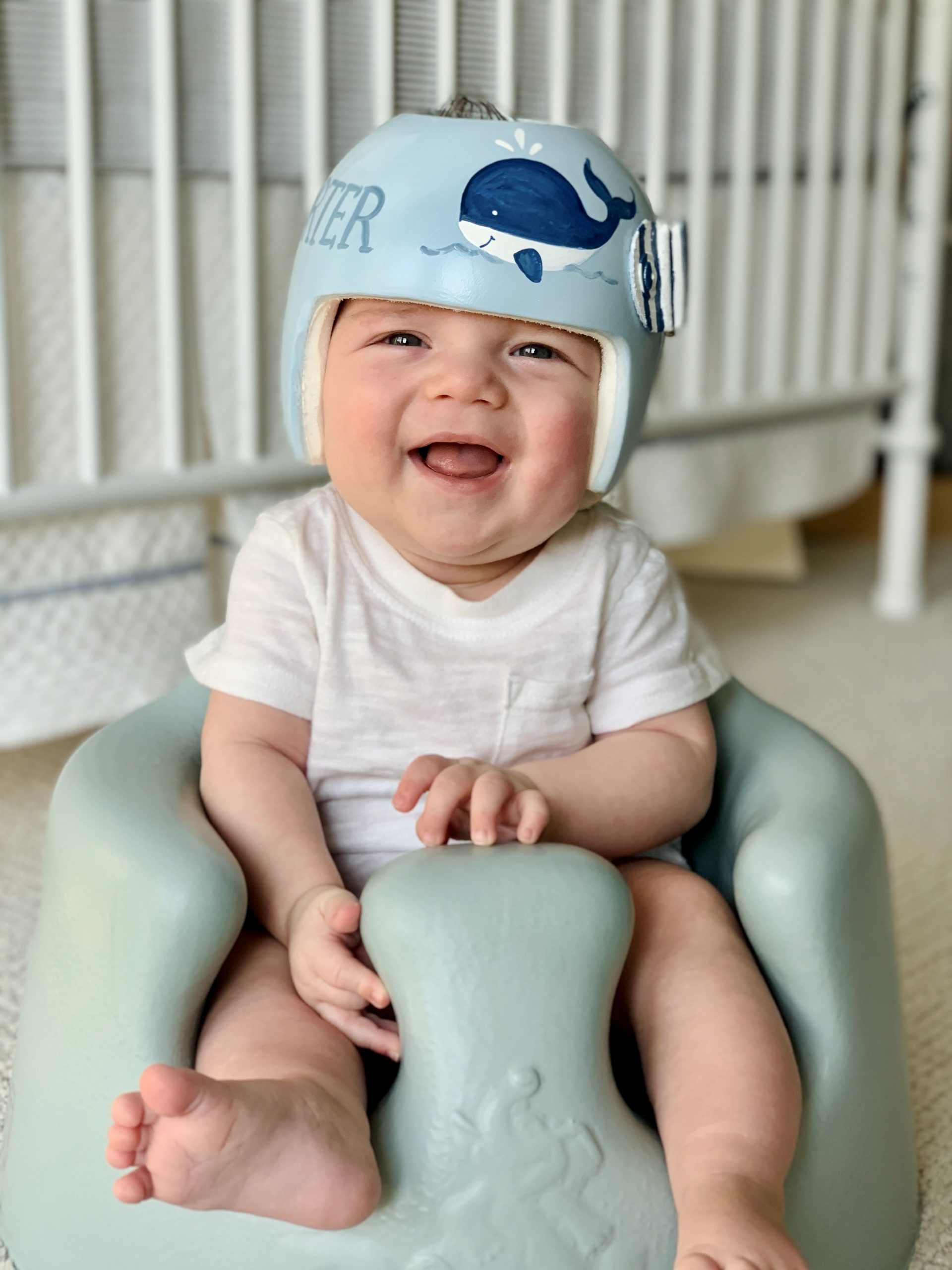 I never thought I’d be writing a whole post on Porter’s cranial helmet experience, but here we are! I’ve briefly mentioned Porter’s helmet in his monthly updates, but today I wanted to go in depth about what the helmet is for, why we needed one and ALL the details of our journey. I found that reaching out to other moms was SO helpful so if you’re going through a similar experience, hopefully you can find this post useful and if you have any specific questions, feel free to comment below! 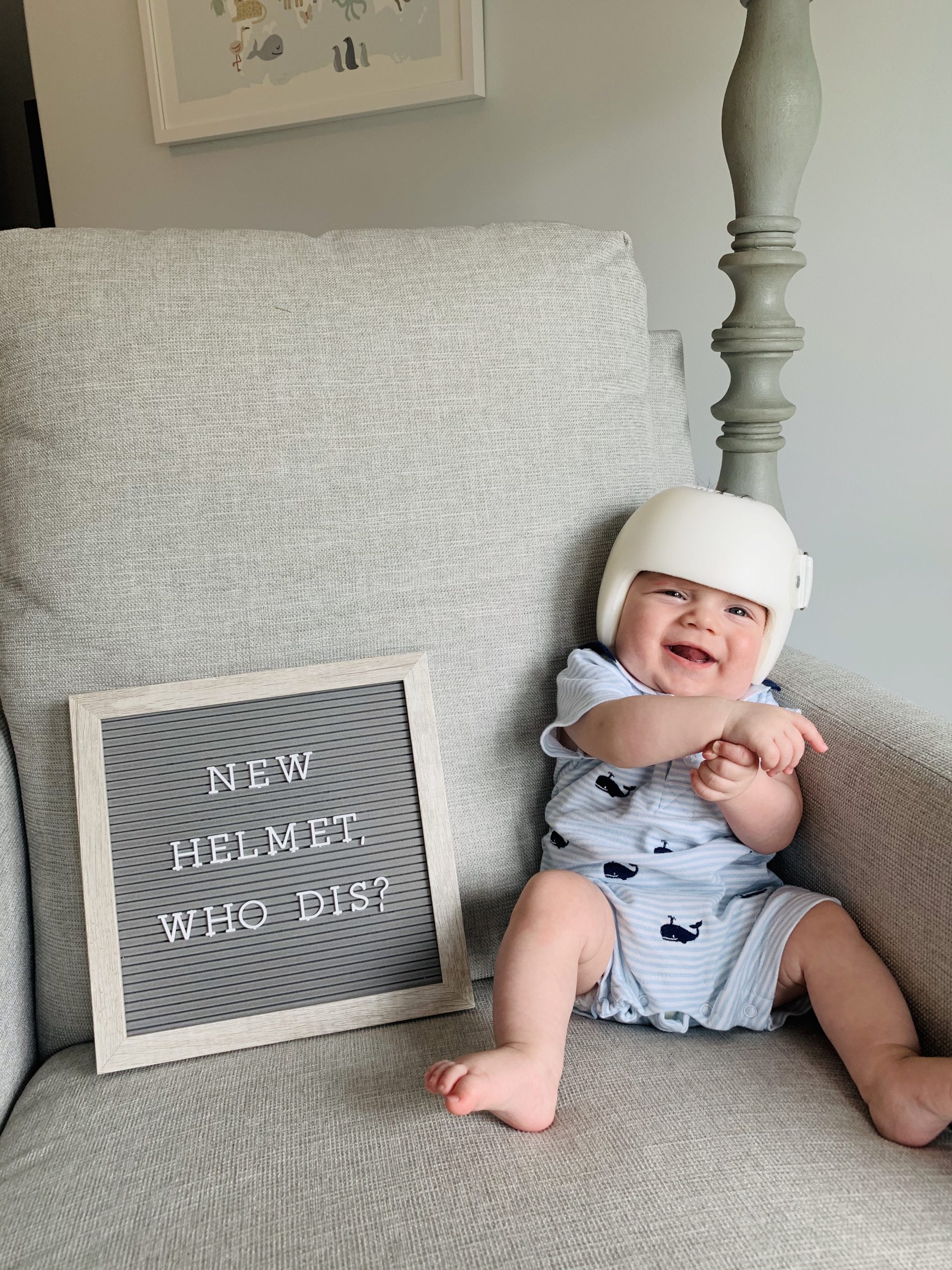 What is a cranial helmet/cranial band?

This is a medical device that babies wear that alters the shape of their head by putting pressure in certain areas. The most common reason for needing one is a condition called plagiocephaly (aka a flat spot on the head). Babies can get a flat spot either on the side of their head or back of the head (brachycephaly). Helmets are also worn by some babies after they’ve had cranial surgery but in this post I’ll just be talking about it in the context of plagiocephaly.

Plagiocephaly can be congenital or acquired. In fact, about 50% of babies get a flat spot at some point so it’s more common than you’d think!  Some babies are born with or quickly develop torticollis, which is a tightening of the neck muscles which can cause them to prefer turning their head to one side. Porter’s was considered congenital because we noticed it so early (8 weeks) but was also due to positioning since he always turned his head to the right when he slept. Unfortunately I didn’t pick up on this until after I noticed the flat spot, then it all made sense.

Helmets weren’t really around when we were growing up because it used to be recommended that babies sleep on their stomachs. This all changed with the “back to sleep” campaign in the early 1990s which showed that stomach sleeping in young infants was a risk factor for SIDS. Anyway, more time on the back means more pressure on the head which is why we see more flat spots now. Another factor is all the devices we put babies in- loungers, swings, etc. These also increase the amount of pressure on a baby’s head so we should be using them in moderation.

Treating these flat spots is technically considered cosmetic which most of the time it is BUT in severe cases it can lead to problems in the futures such as uneven facial features, uneven ears which cause problems with glasses or jaw problems. If you have a severe flat spot in the back, it can cause helmets to fit improperly which can cause issues if you’re trying to bike or play sports.

**I don’t have a lot of great “before & afters” but found some random photos where you could really notice the flat spot. I’ve also included his last 3 scans where you can really see the progress! 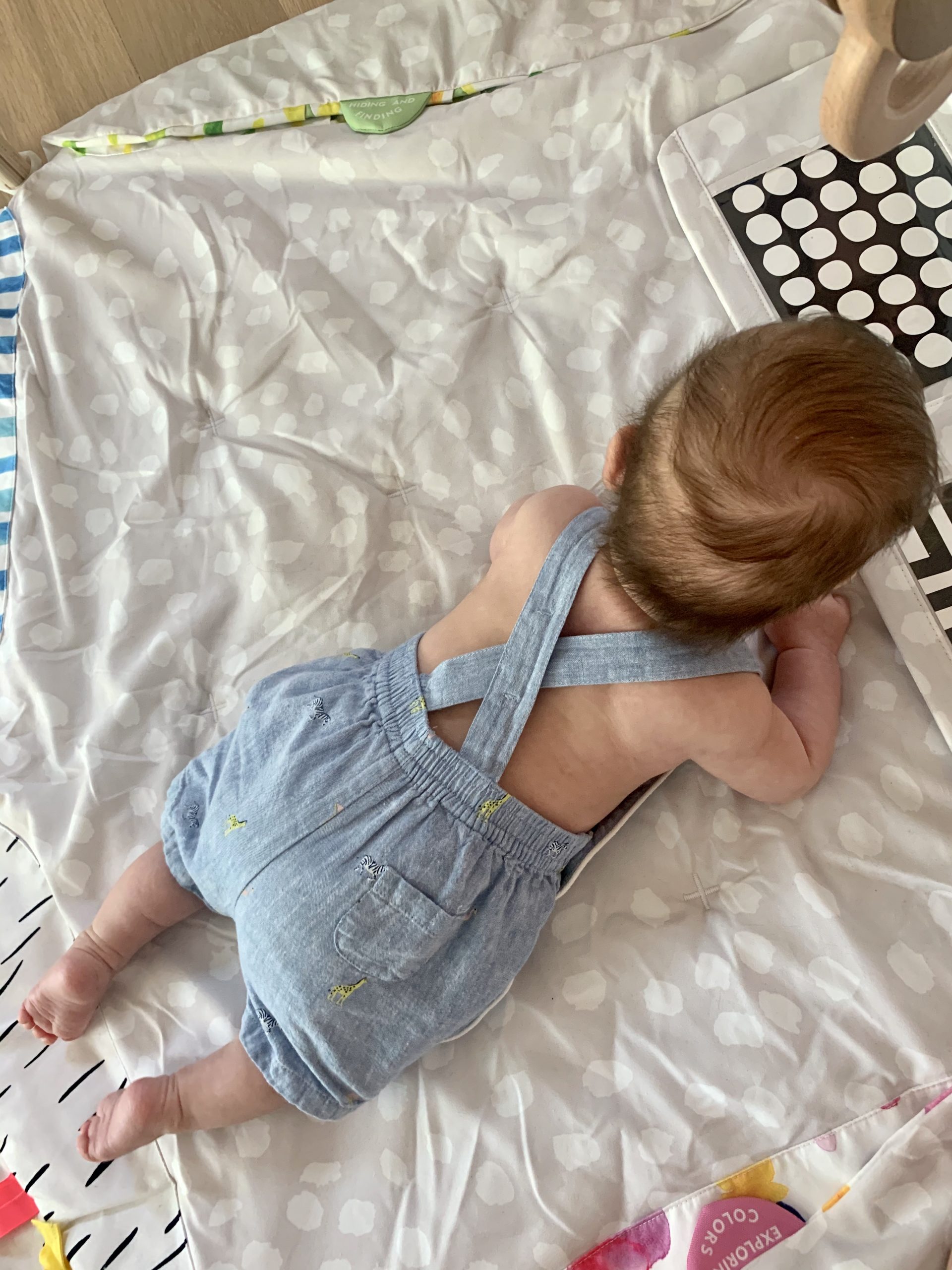 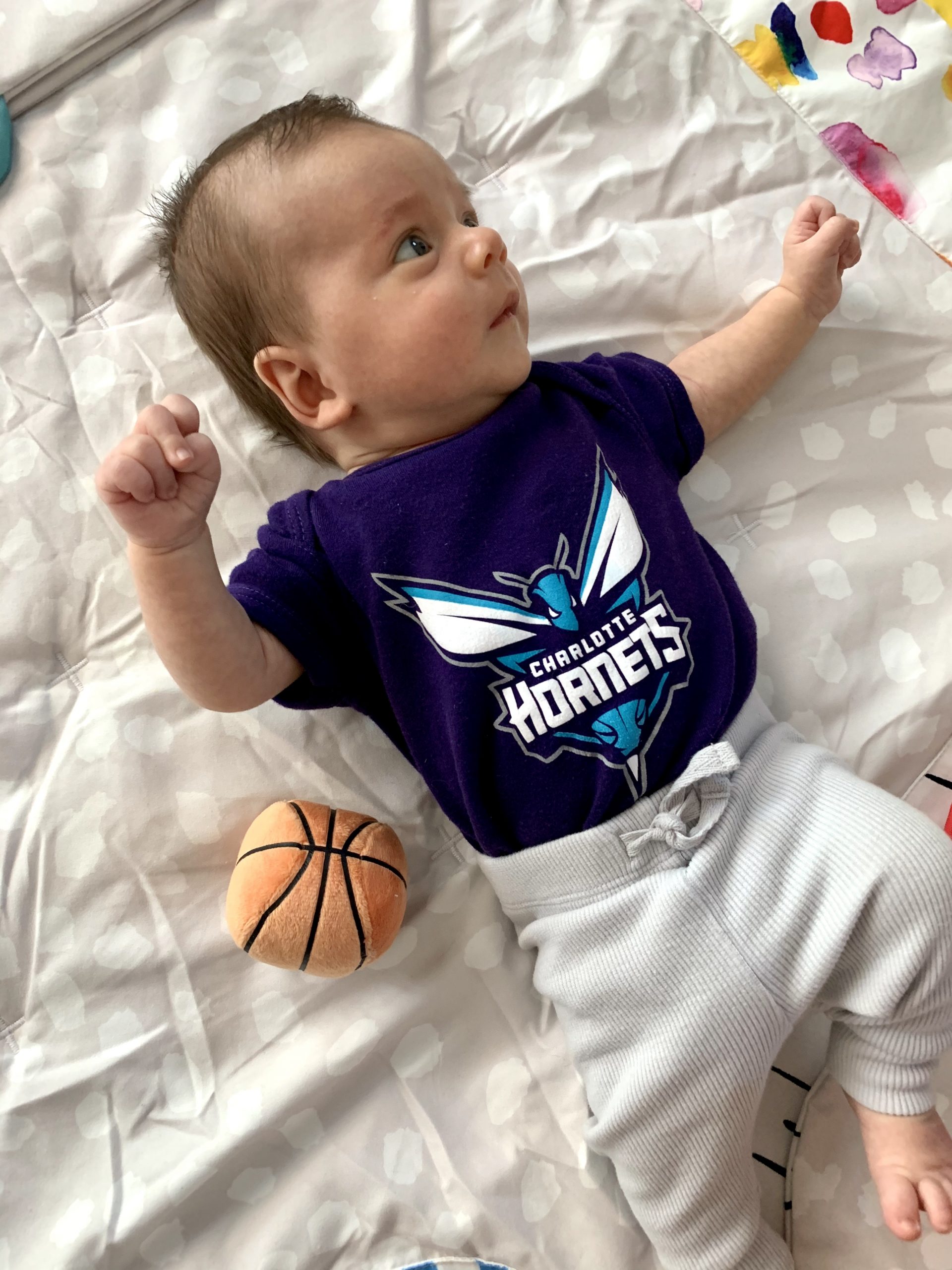 Before & after, June 6th to September 9th. 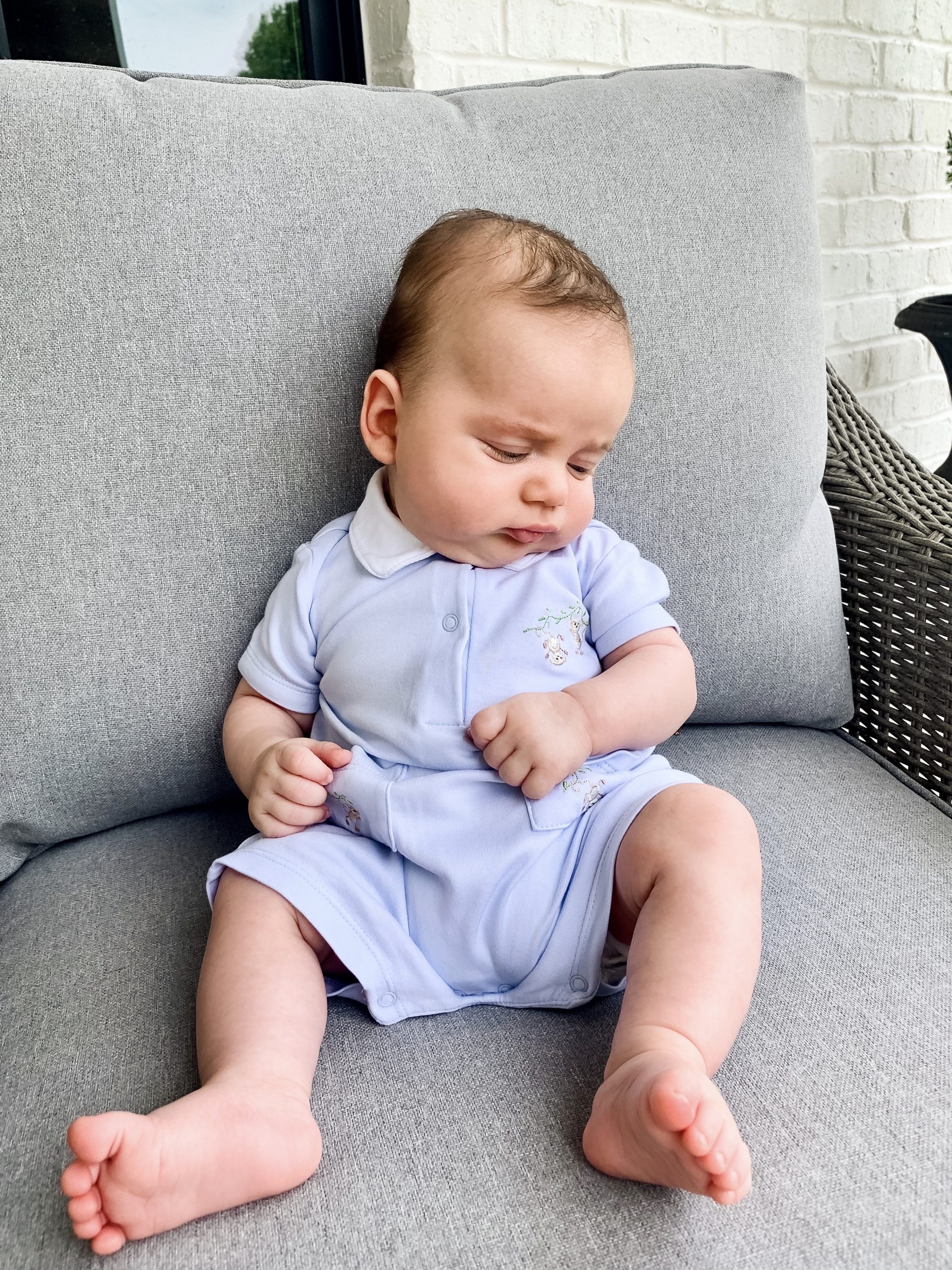 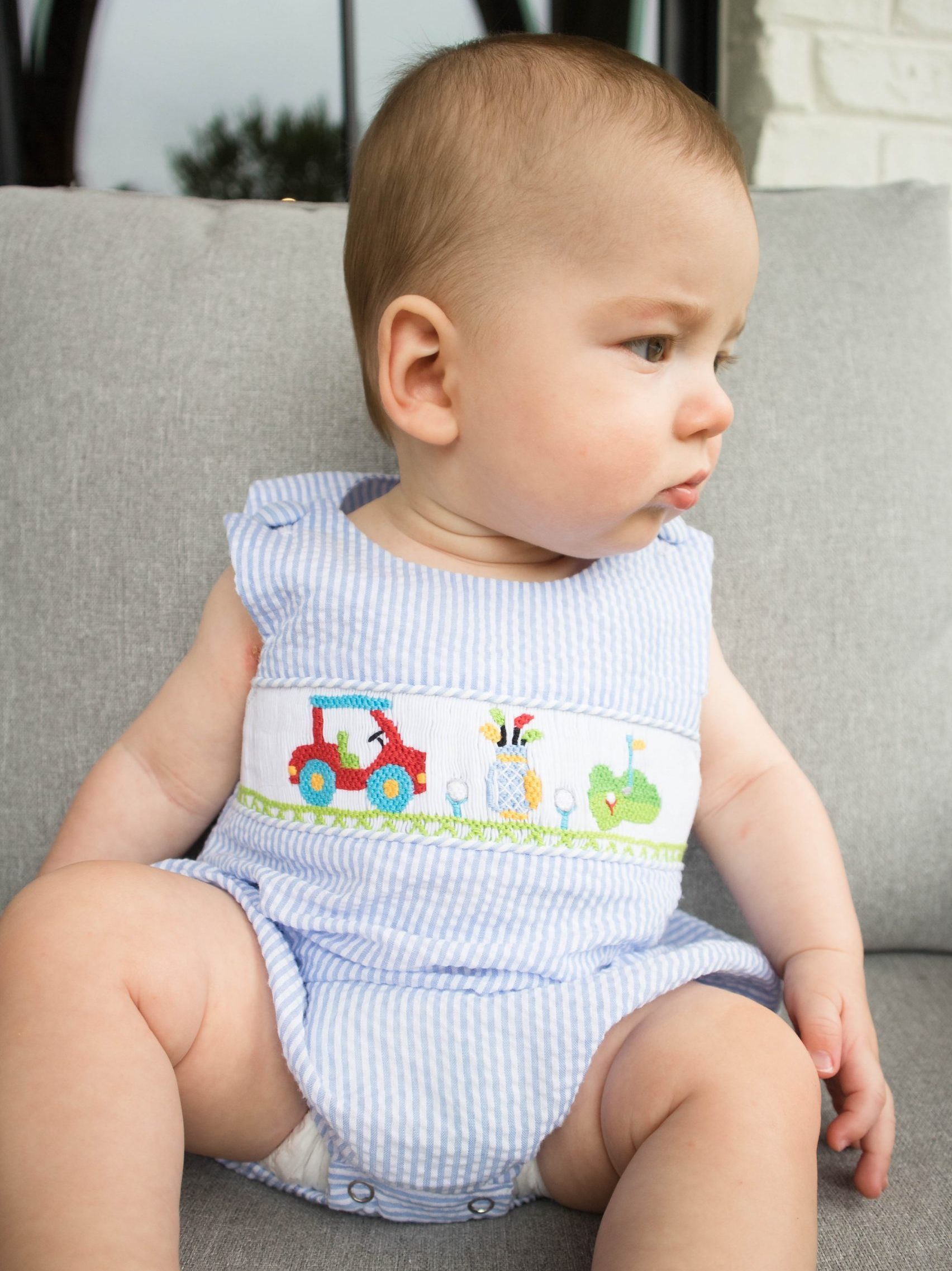 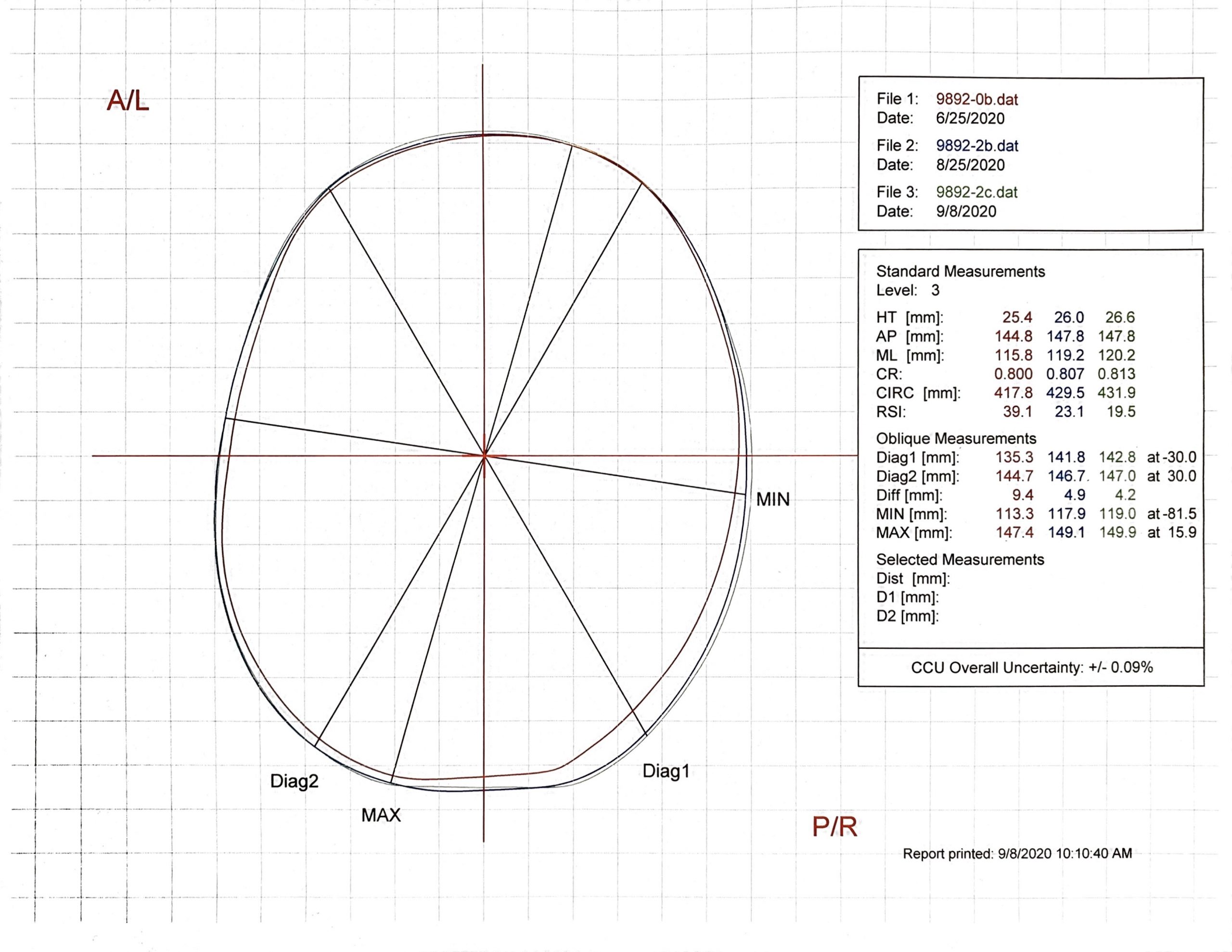 What can you do to treat it?

If you catch the flat spot early, you can try to fix it with repositioning and physical therapy. Anytime we noticed Porter was sleeping with his head to the right, we would gently turn his neck the opposite way. You can only control so much when they sleep so we also did some PT exercises to work on his neck range-of-motion. Also, lots of tummy time is very important! This can resolve flat spots for a lot of babies, but not always.

Babies generally can’t get a helmet until they’re about 4 months old or have enough head control to wear it safely. I think having Porter start so early was the best decision because they usually don’t affect younger babies as much as they affect older babies. Also, generally the younger they are, the less time they’ll need to wear the helmet since the head grows more quickly in the earlier months (that of course depends on severity).

Why did Porter need a helmet?

After 2 months of PT and repositioning, I didn’t see much of a change in his head shape even though his neck range-of-motion had improved. At his 2 month appointment, our pediatrician didn’t seem concerned but said we could start PT if we wanted to so we started to visit Ryan’s sister (she’s a pediatric physical therapist) once a week. We also did our own exercises and stretches at home but unfortunately it wasn’t enough. When we had our scan at our orthotic clinic, he was in the low-moderate range so we decided to proceed with the helmet.

Because no one’s head is perfectly round, the normal range for asymmetry is 0-6mm, moderate is 6-12mm and anything >12mm is severe. Porter’s first scan after 1 month of repositioning was 10.2 and the next one was 9.4 so that’s when the recommendation to helmet was made.

Our clinic offered the STARband. This company uses a laser scanner which gets 3D measurements for the helmet so they don’t have to cast your baby’s head in plaster (which doesn’t sound pleasant). The helmet contains foam that is specially made to fit your baby’s head. There is pressure being placed on the bulging area and extra space over the flat area. We had 3 additional scans and some foam was removed each time to give Porter’s head more room to grow.

The first day he was definitely a little more fussy and struggled with tummy time, but he adjusted so quickly! Each baby’s experience is different but I’m happy to say that it didn’t affect his sleep at all and he seemed to be unfazed by it. Since he wore it during the summer, we took extra measures to keep him cool as they can sweat more with the helmet. We always kept the portable fan with him in the stroller and moved a fan into his room for sleeping. The helmets can also get quite stinky so we cleaned it twice a day with rubbing alcohol and would let it dry in the sun to help with the smell. This was worse in the beginning since babies have to learn how to regular their temperature with the helmet, but as the weeks went on he definitely wasn’t as sweaty. 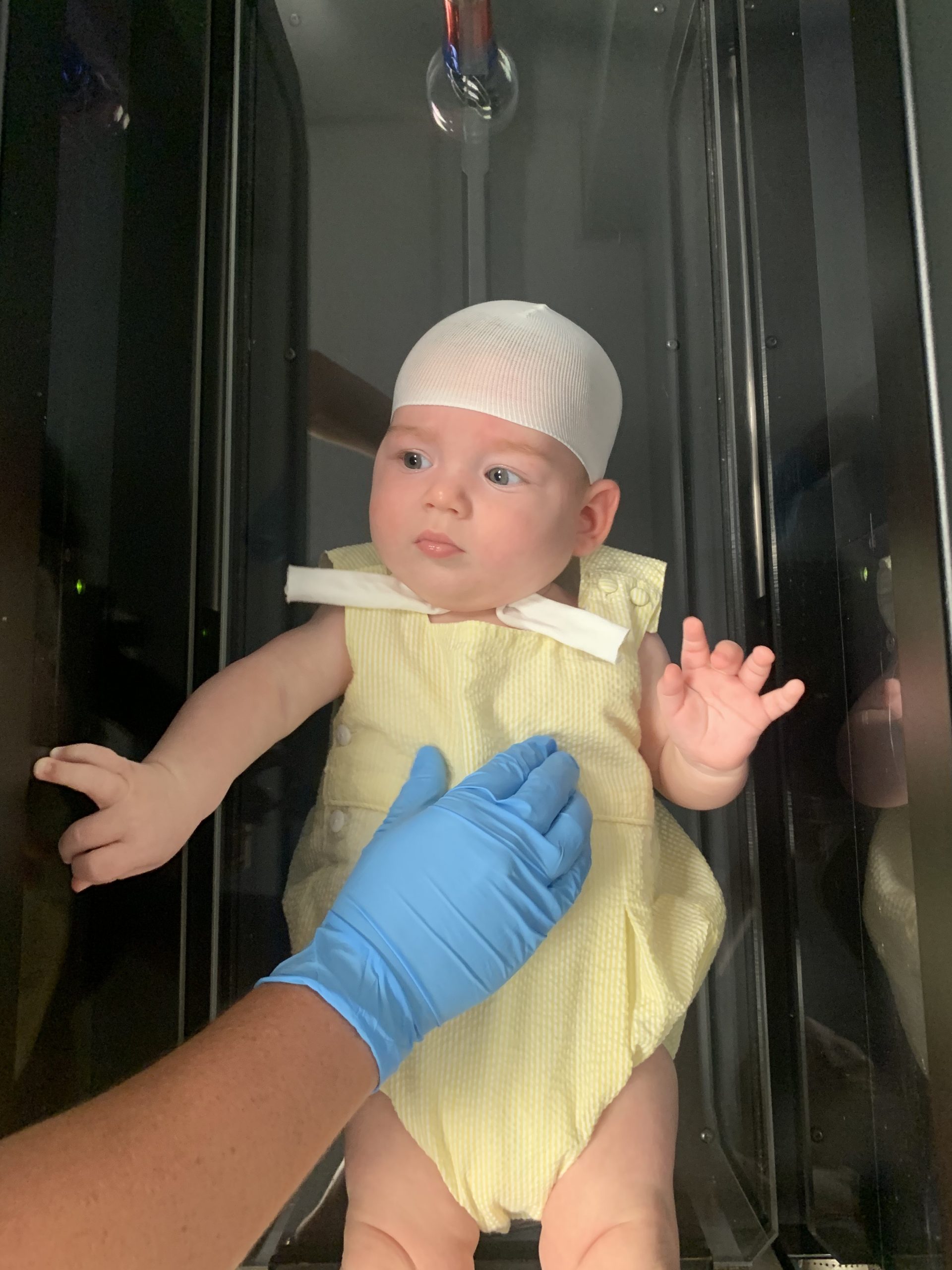 How long did he wear it?

Porter wore his helmet for just under 8 weeks! I was so thankful that this was a quick process. He wore it on and off the first two days then 23 hours/day after that. I know that seems like a lot BUT trust me, it’s more doable than you think. We took two 30-minute breaks every day for baths, walks, snuggles or pool time. Anytime I wanted a helmet-free picture, I just took it off! Toward the end of his treatment he weaned out of the helmet. The first week he only wore it for naps, bedtime and time in the carseat then he did a week without the helmet before the final scan to make sure there wasn’t regression. 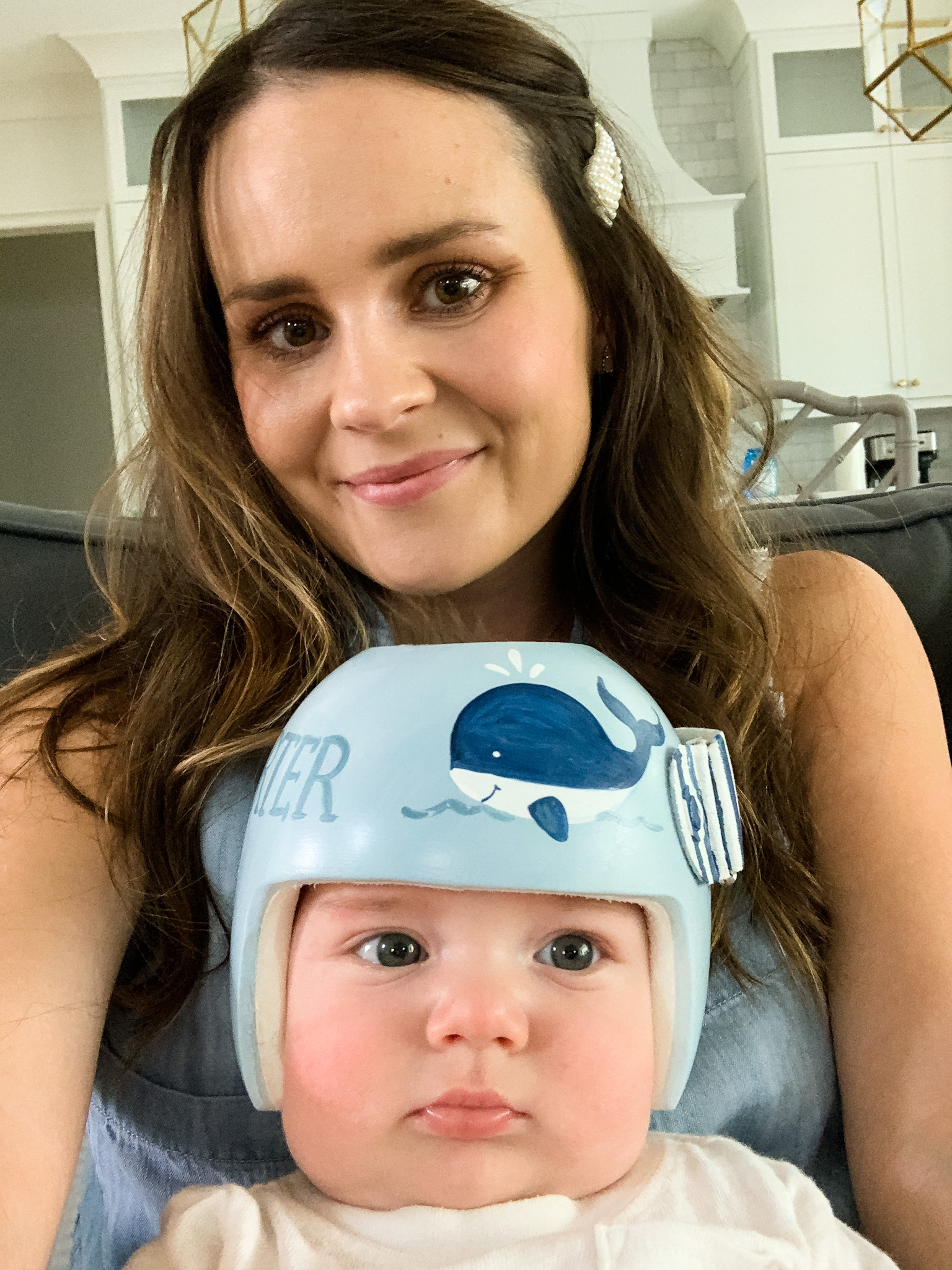 Is it covered by insurance?

I believe most insurances will cover part of this medical device. You have to have a prescription from your pediatrician but the treatment is still generally considered cosmetic so it’s unlikely it will be covered at 100%. Our was covered at 50% which included the helmet and all office visits.

Who decorated the helmet?

If Porter had to have a helmet, then you know I was going to make it as cute as possible! There is a local artist in the Charlotte area (Artistry by Leigh Gibson) who paints THE most amazing designs on cranial helmets. Check out her Pinterest board here. I dropped it off and it was finished in 2 hours (I think you can also mail them in to her). I wanted a preppy, nautical design for summer and I was SO happy with how it turned out. I highly recommend decorating helmets just to make them more fun- decals are another option and bows are fun for little girls. 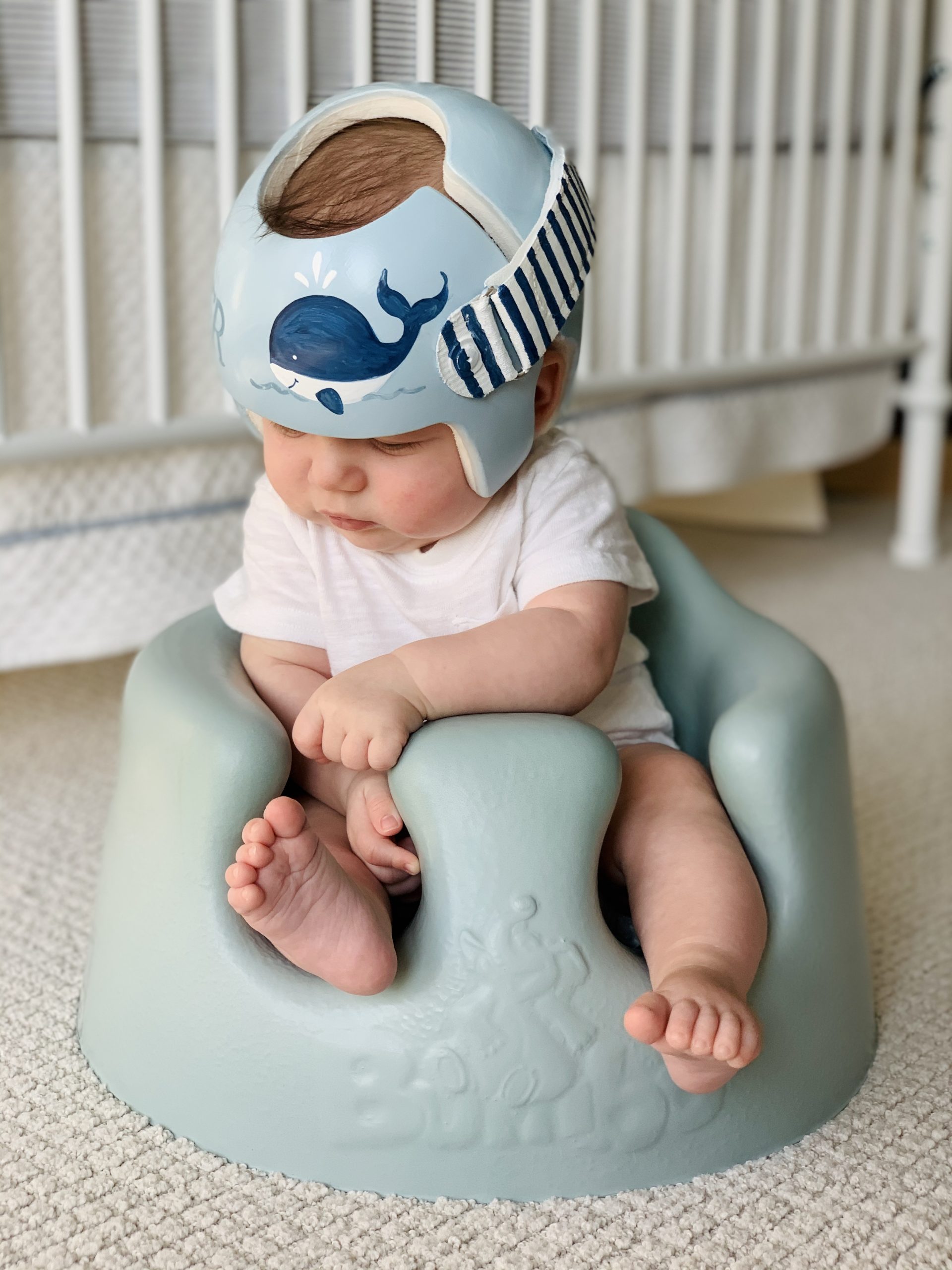 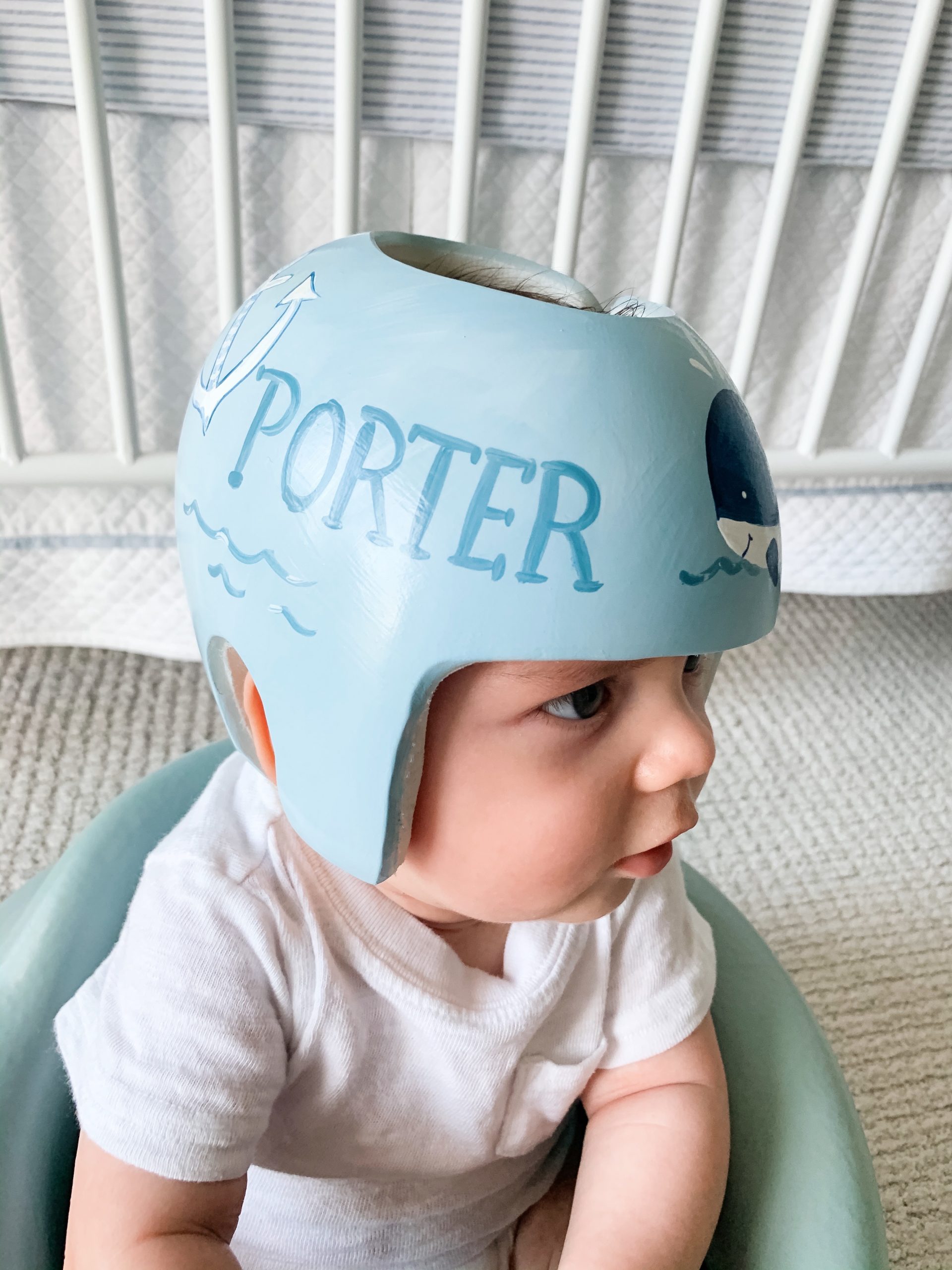 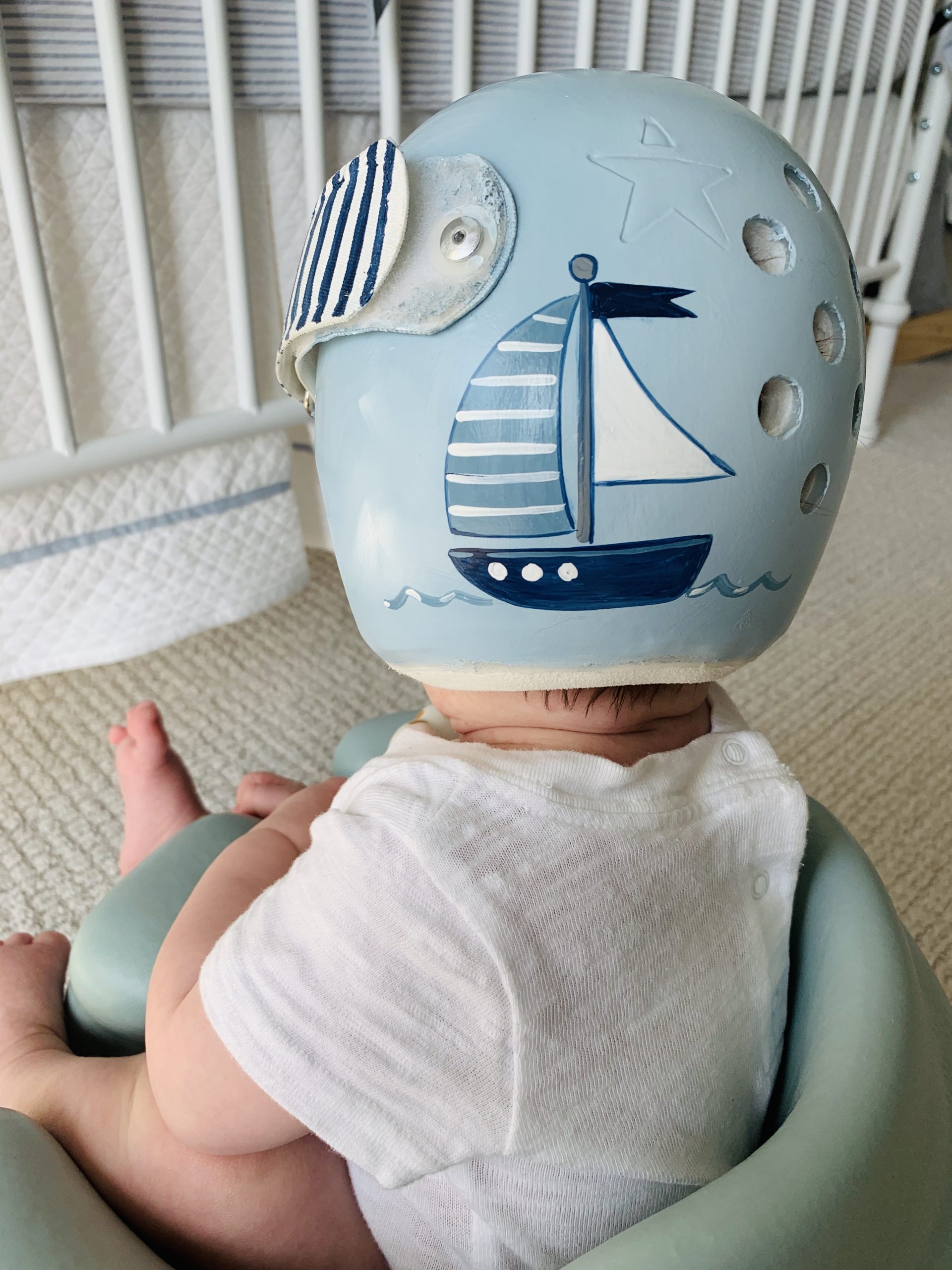 Overall thoughts on the cranial helmet?

While I was very anxious about Porter getting the helmet, I am so happy we did it and am very happy with the results. Flat spots aren’t anyone’s fault and some babies are just more prone to get them. We were so diligent with our PT but just didn’t see enough progress from that so we knew the helmet was the best option for Porter. This is a decision that every parent has to think hard about but ultimately you have to do what’s best for your family.

I’m so glad that we started early which led to a shorter time in the helmet. While I did miss snuggling and kissing his head, it wasn’t nearly as bad as I had imagined. Just a few extra steps that we had to go through during the day but the time went by so quickly.

If you’re going through something similar with your baby, I found this Facebook group to be a great resource and a way to connect with other “helmet moms” (I swear, there’s a Facebook group for everything these days)! I’ll leave you with a picture of my little guy with his certificate of completion form the day he graduated from the helmet! 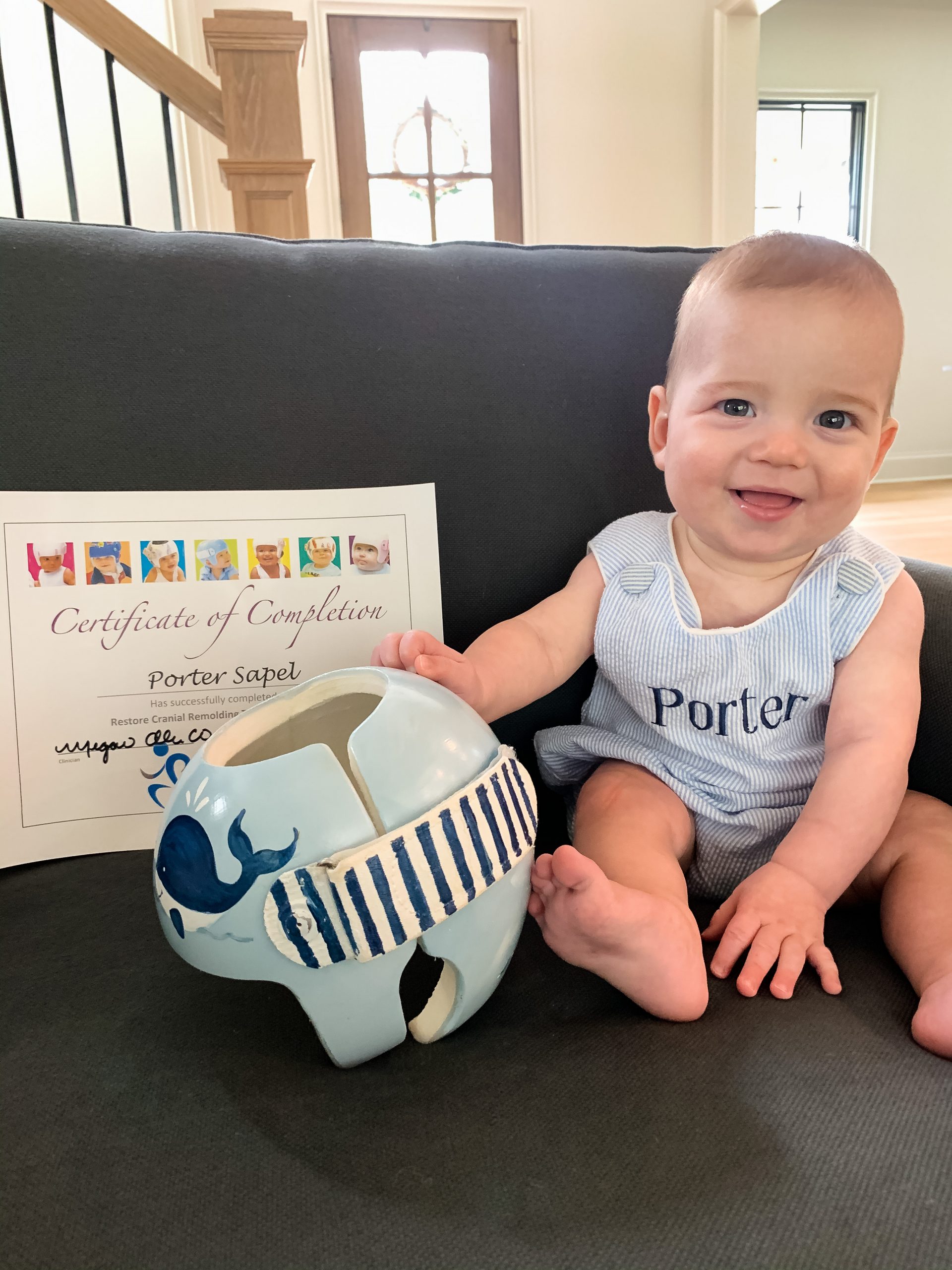