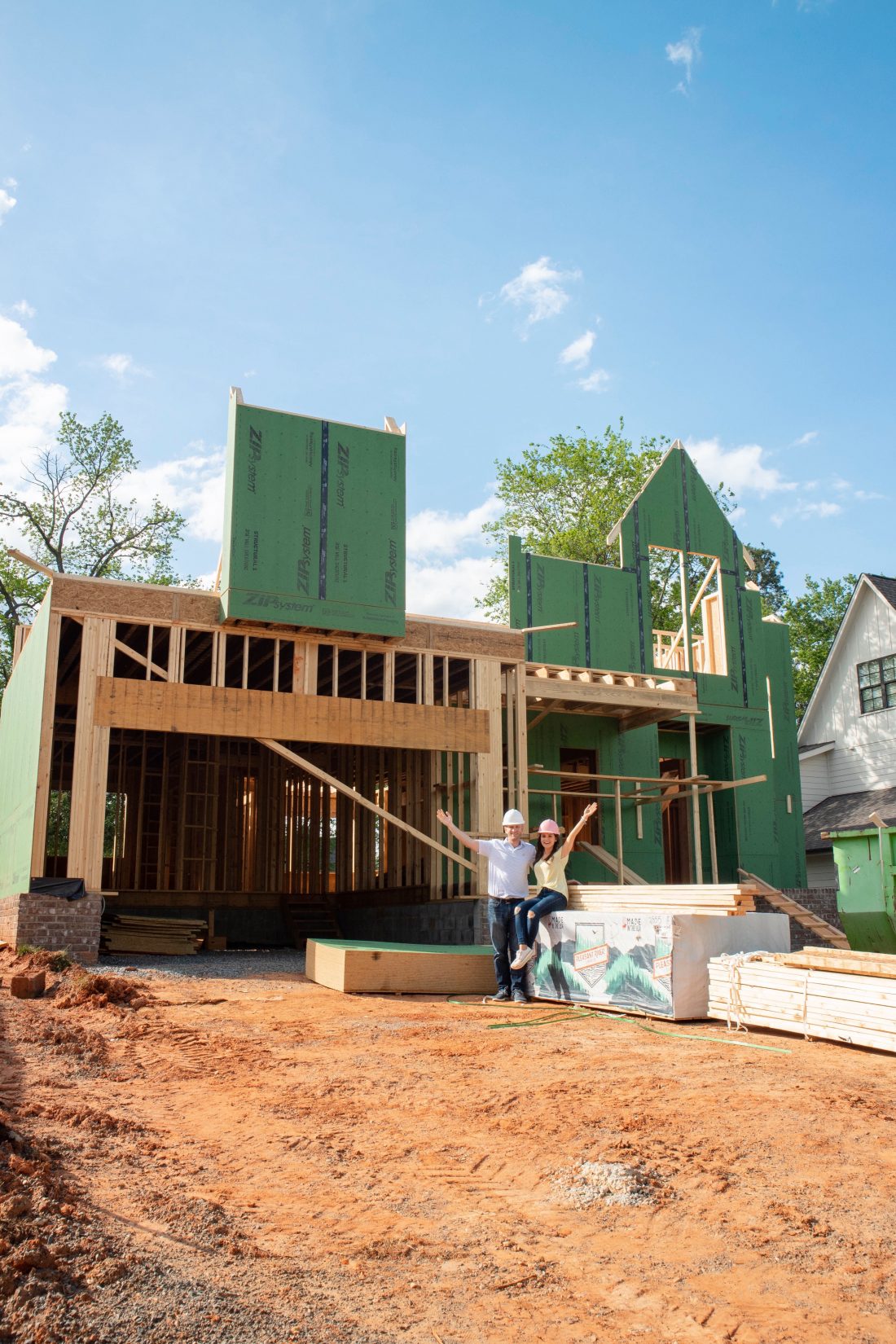 I am SO excited to finally share some big news with you guys… we’re building a new home!!! We didn’t plan to build so soon after moving into our townhouse but things just kind of fell into place and we couldn’t be more excited to start this journey of custom building. And what a journey it is!! Ryan & I both love Charlotte and can’t imagine living anywhere else so we won’t be going far, we’ll actually be right down the road from our current home. I am looking forward to sharing the process with you guys- from creating the floor plan to picking out the finishes and everything in between. Today’s post is a lengthy one but I’m sharing why we decided to build and a few of the initial steps that got things rolling!

If you’ve been following my blog for a while you know that we moved into a new townhome in March of 2017 and we have loved it SO much! Since we were the first buyers, we did get to experience the building process but the extent of “designing” our home was picking from package A, B or C. We always said that this would be our 5 year home but Ryan & I always keep our eyes on real estate. We have seen the explosive growth in our neighborhood and wanted to lock into a property sooner rather than later so we decided this would be the year! We both prefer new construction homes to “fixer uppers” and have always talked about building a custom house one day, I guess a part of me just didn’t know if it would actually happen.

Ryan & I have gone to so many open houses over the years and it has helped us realize what we want and don’t want in a home. We’ve been in a lot of spec homes that we liked, but ultimately would always notice things we would change. FYI- a spec home is a house that a builder will build to eventually put on the market and sell. A lot of these are still homes with unique styles and characteristics unlike tract homes that you might find in a suburban development where all the floor plans and exteriors are the same.

We ultimately decided to go the custom route because we had a good idea of what we wanted as far as floor plan, design features, and truly wanted to make it our own. Where we wanted to build also had a factor but I’ll get more into picking the lot in the next post!

Ryan and I love driving around Charlotte looking at houses and also attend a lot of open houses just out of curiosity. This was helpful in coming up with a list of builders that we wanted to talk to about building our house. I feel like the more we visited, the better idea we had for what we wanted in out house. When you start talking to builders they should be able to give you a rough idea of what their cost to build is per sq foot. They won’t be able to give you an exact price until the design plans are completely done (Ryan was very frustrated by this) but they can at least tell you if they are in the ballpark of your budget. Builders can have large differences in price and some of them will just be out of your budget so it’s important to keep your expectations in check. We actually found Grande Custom Builders after going to an open house and later discovered they built several other houses around town that caught our eye, it felt like it was a perfect match! 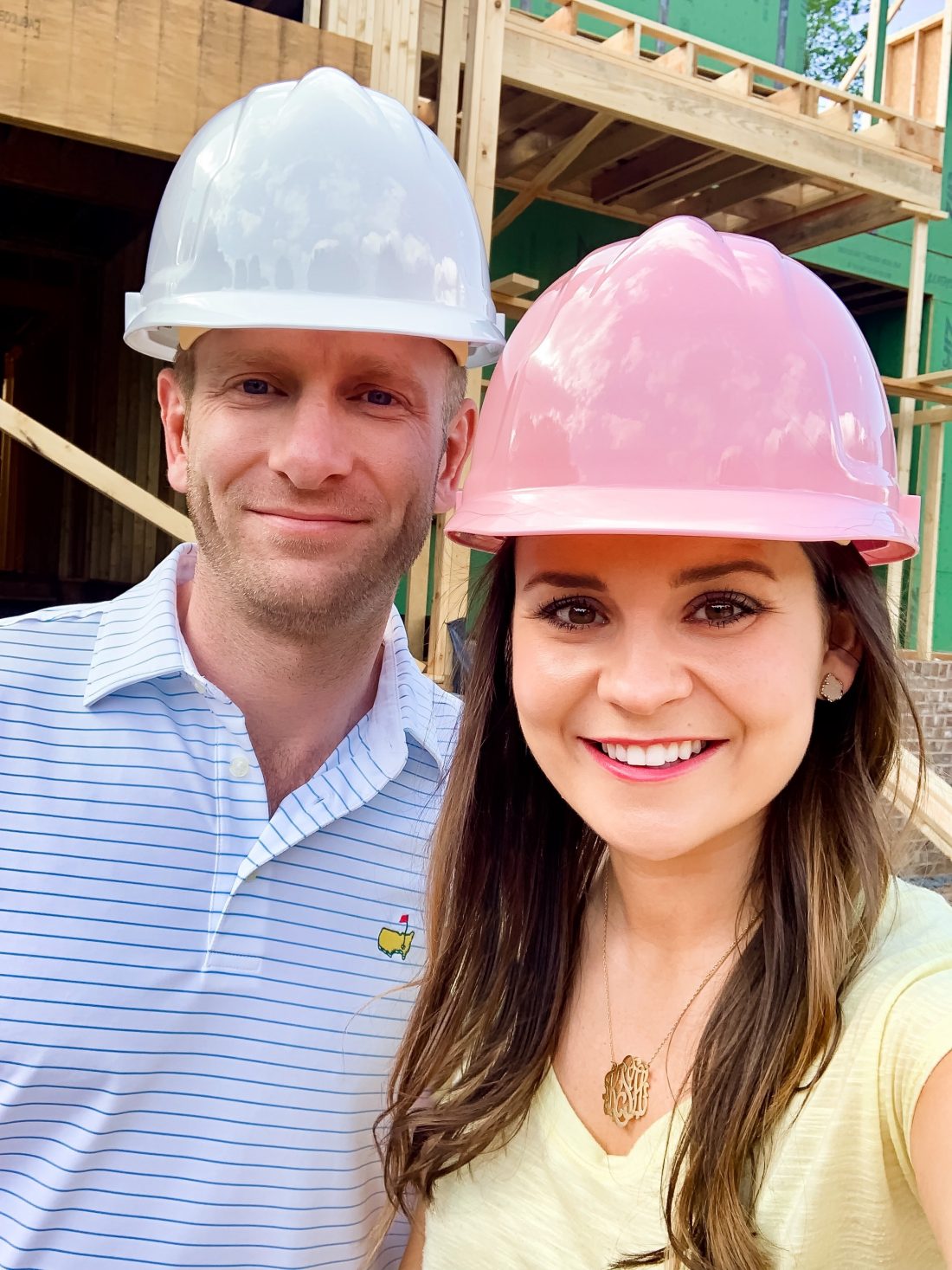 There are lots of websites and architects that offer pre-existing plans that you can purchase or you can go the custom route. Most pre-existing plans will have a set price for the plans or if you are going the custom route most architects will charge a per square foot price. If you go the custom route, make sure you have the architect tell you if their price is per heated sq. foot or all covered sq. footage (things like a garage and porches). When we were trying pick a builder for our house we found out that they often worked with an architect that had designed many of the houses that we had already liked in Charlotte. After checking out some of their other work we were sold on Frusterio. They aren’t local to Charlotte so everything we did was over the phone and email but it worked out just fine. Having both exterior and interior examples of what we wanted allowed the process to go quickly and smoothly. 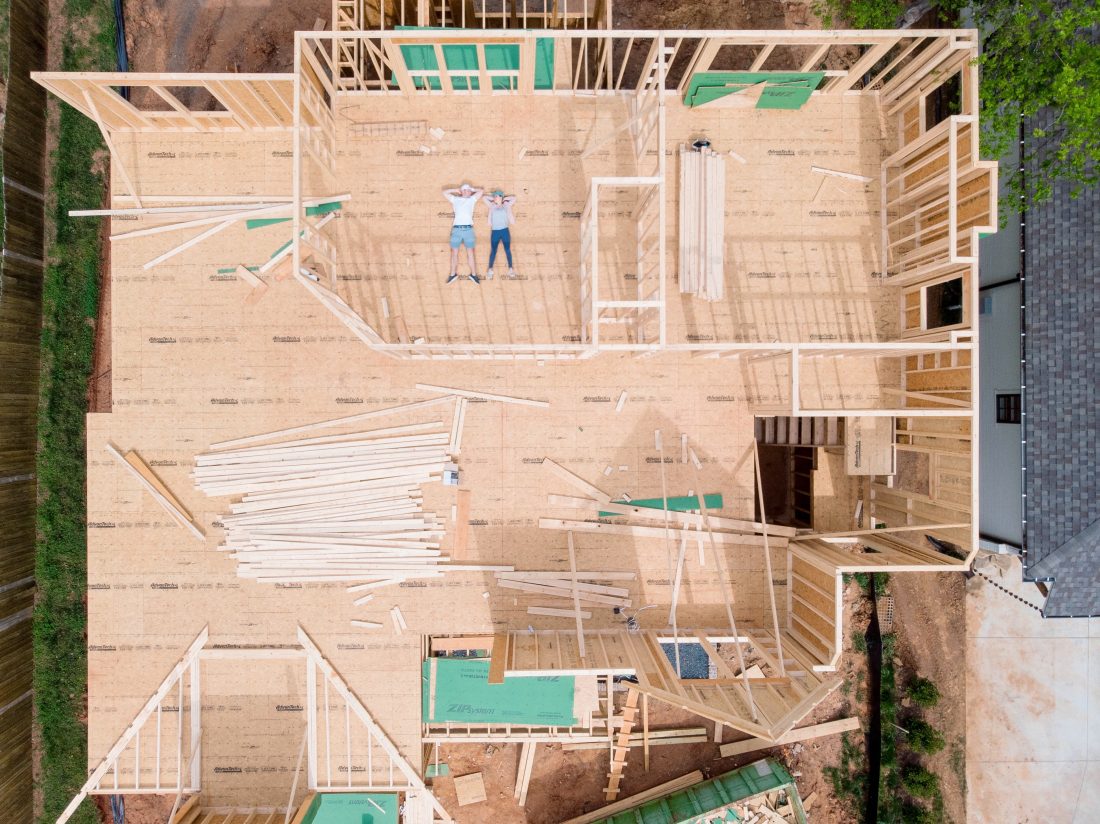 One of the most fun aspects of this process has been coming up with the layout and design of our house. This is where you get to take everything you ever loved about another house and incorporate it into your design. As I mentioned before, Ryan and I have been to a lot of open houses so we had a big list of things we wanted and didn’t want in the house. During your initial visit with your architects it gives them a good starting point if you have a list of things you want and obviously pictures help out a lot as well.

You have to constantly monitor the square footage of the house to stay within your budget. You may not think that an extra 100 feet is a lot but if your downstairs has 100 extra feet and then the second story has that same extra, that total of 200 square feet adds up really quick. If your average build cost is $150/foot then you just added $30,000 to your budget!

One thing that we had no idea would happen is that every little change you make to the layout normally affects something else. If you add space in one area it normally takes it away from somewhere else. We originally wanted 4 bedrooms plus a bonus room upstairs but when we tried to keep the total square footage within budget, the rooms were getting too small so we eventually ended up with 4 total rooms with one of them being able to serve as a bedroom or bonus room. Our laundry room also ended up on the exact opposite side of the house from where it started. My advice, be very open to change!!

Whew, congrats if you have made it to the bottom of this post! I can’t wait to share more about the building process with y’all and will dive into budgeting and acquiring a lot for the next post. We have already learned SO much and if you’ve ever been interested in building a home, hopefully our experience can provide firsthand insight to everything that goes into building a house. 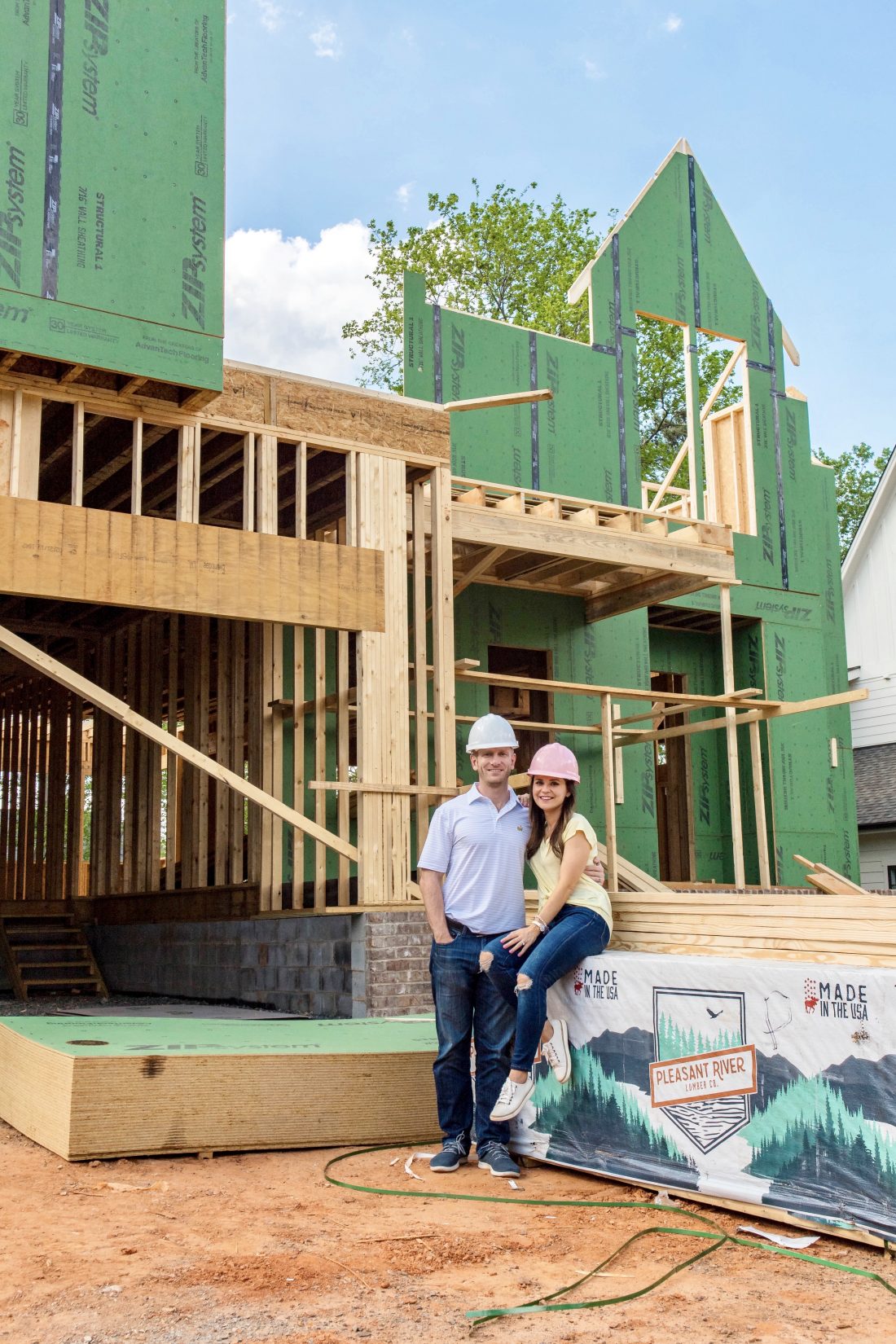 Last but not least, here is a rendering of what our future home will look like! We’ve already made a few tweaks and I’m excited to watch this image come to life! 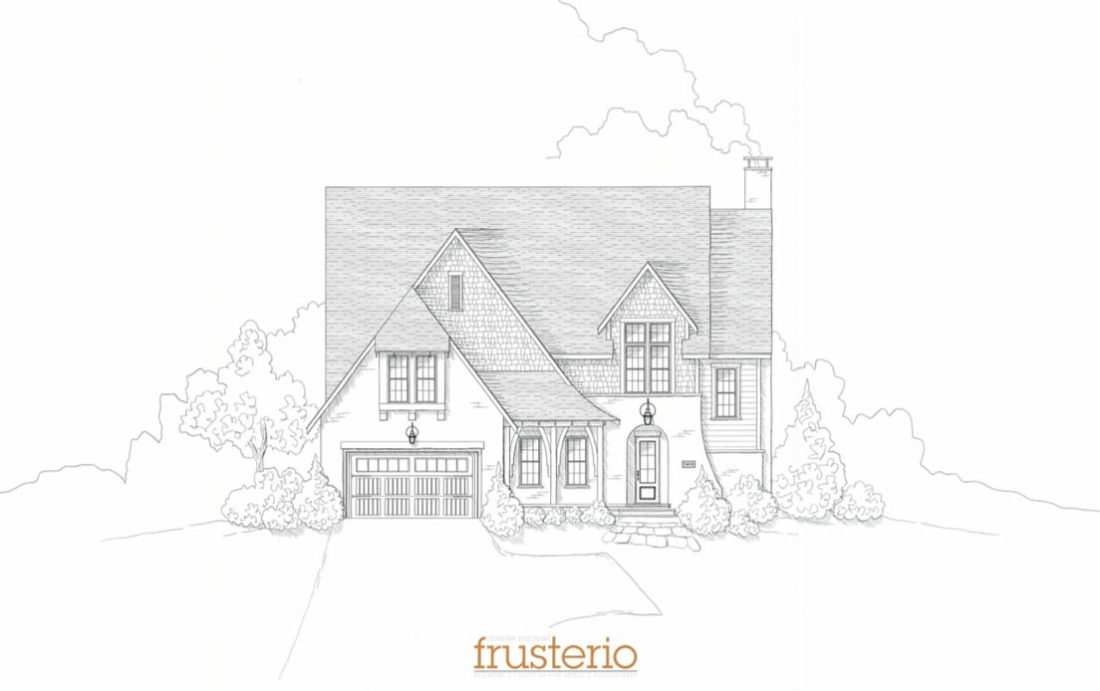