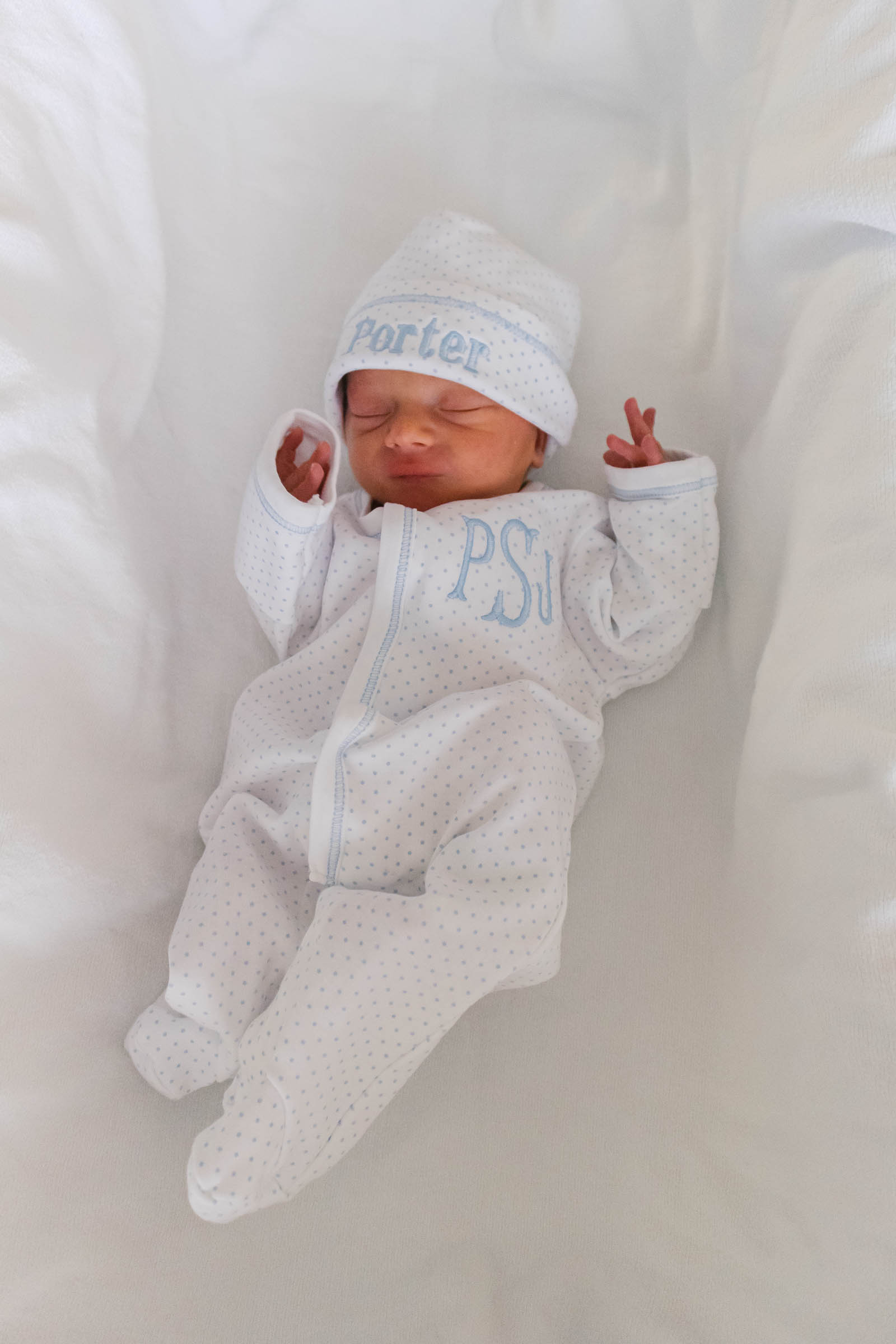 Let’s start with the backstory. When I was about 34 weeks, my OBGYN said I was measuring just a bit small but then asked how tall I was and said it’s likely due to my petite size. She expected something along the lines of a 6.5 pound baby versus something like 8 pounds. They they ordered another ultrasound to look at size of baby, fluid, etc. When I had my follow-up my OB said he was about 18.9% as far as growth which was a little small, but not anything super concerning BUT wanted to send me to maternal fetal medicine (specialist) to get another ultrasound just in case. 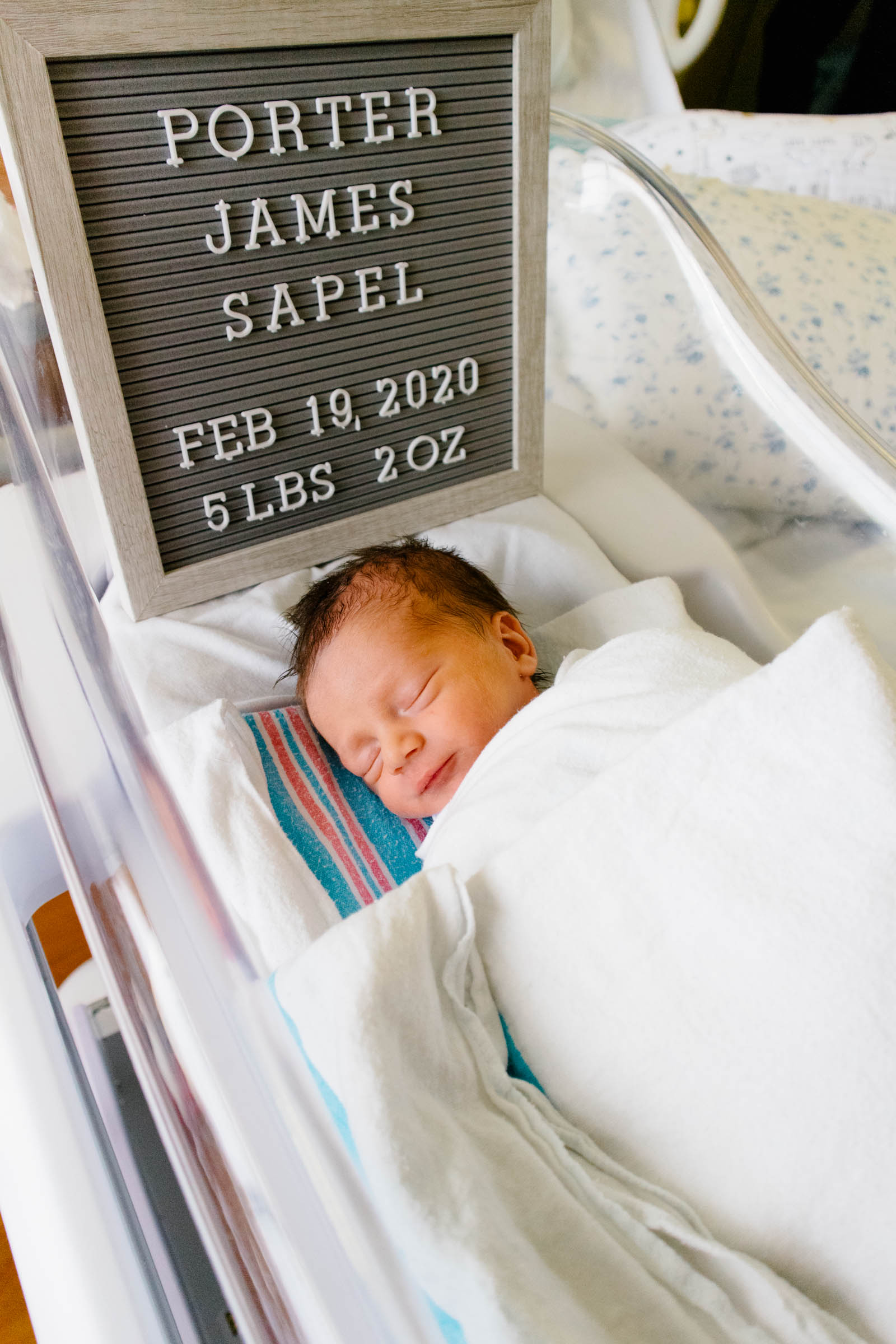 I went to my MFM appointment on a Monday afternoon to have an ultrasound then saw the doctor. They then said he was actually showing about 9% and anything under 10% is diagnosed as IUGR (intrauterine growth restriction). This can happen for many reasons- one being constitutional (due to genetics or the fact that I’m small in general), genetic conditions with the baby or problems with the placenta. Everything else on the scan looked perfectly normal BUT then the doctor told me that she recommended I deliver within a week. A WEEK! You can imagine how freaked out I was. I mean, I knew that after 37 weeks the baby could come at any time and technically be okay because that’s considered “early term” BUT… when someone is telling you that you’re having a baby in the next few days it’s still kind of scary. Plus, I just figured he would be born closer to his due date in early March. You would think a smaller baby would need more time in utero to grow but if there are signs of growth restrictions, they prefer to deliver early to minimize any risks to the baby. 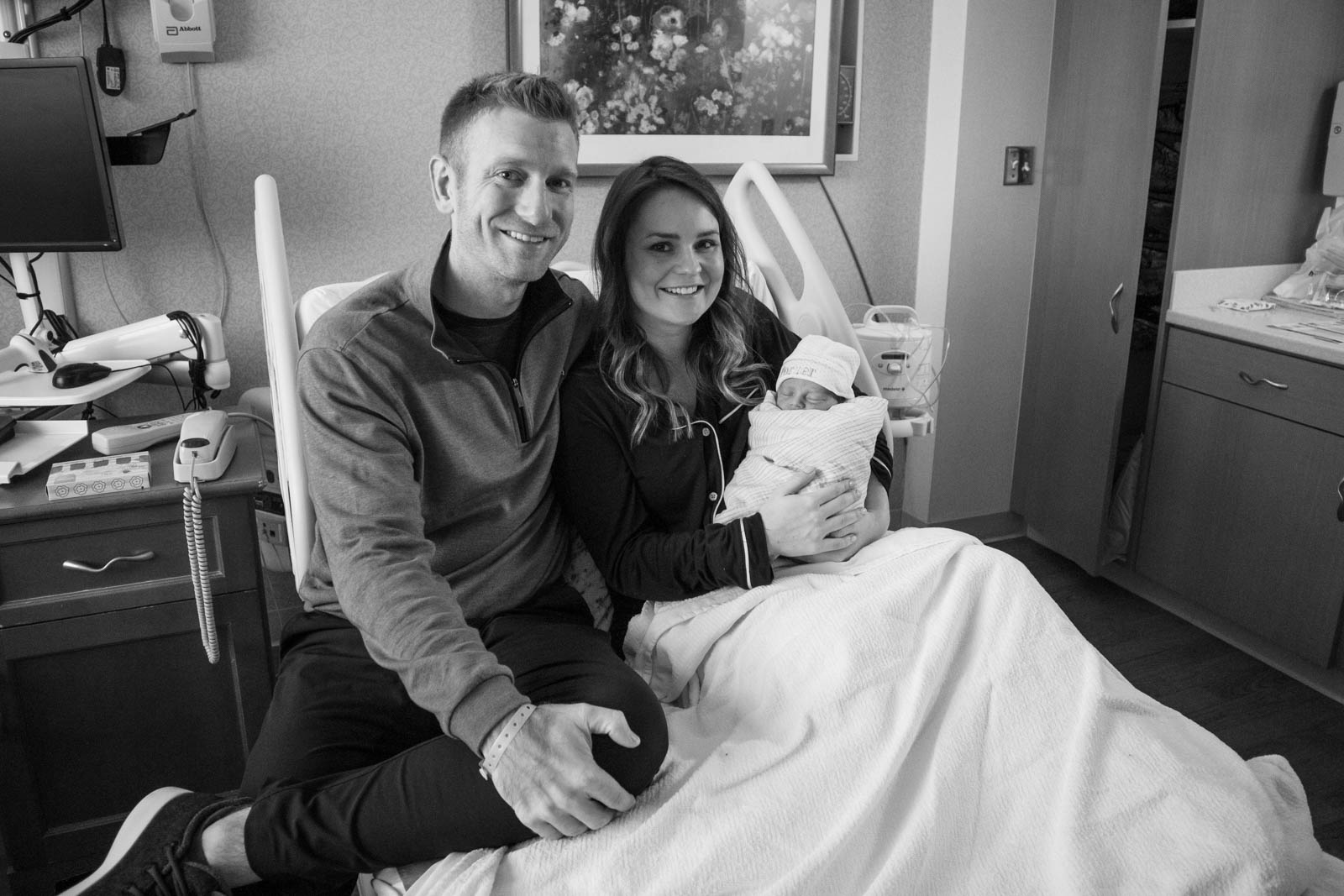 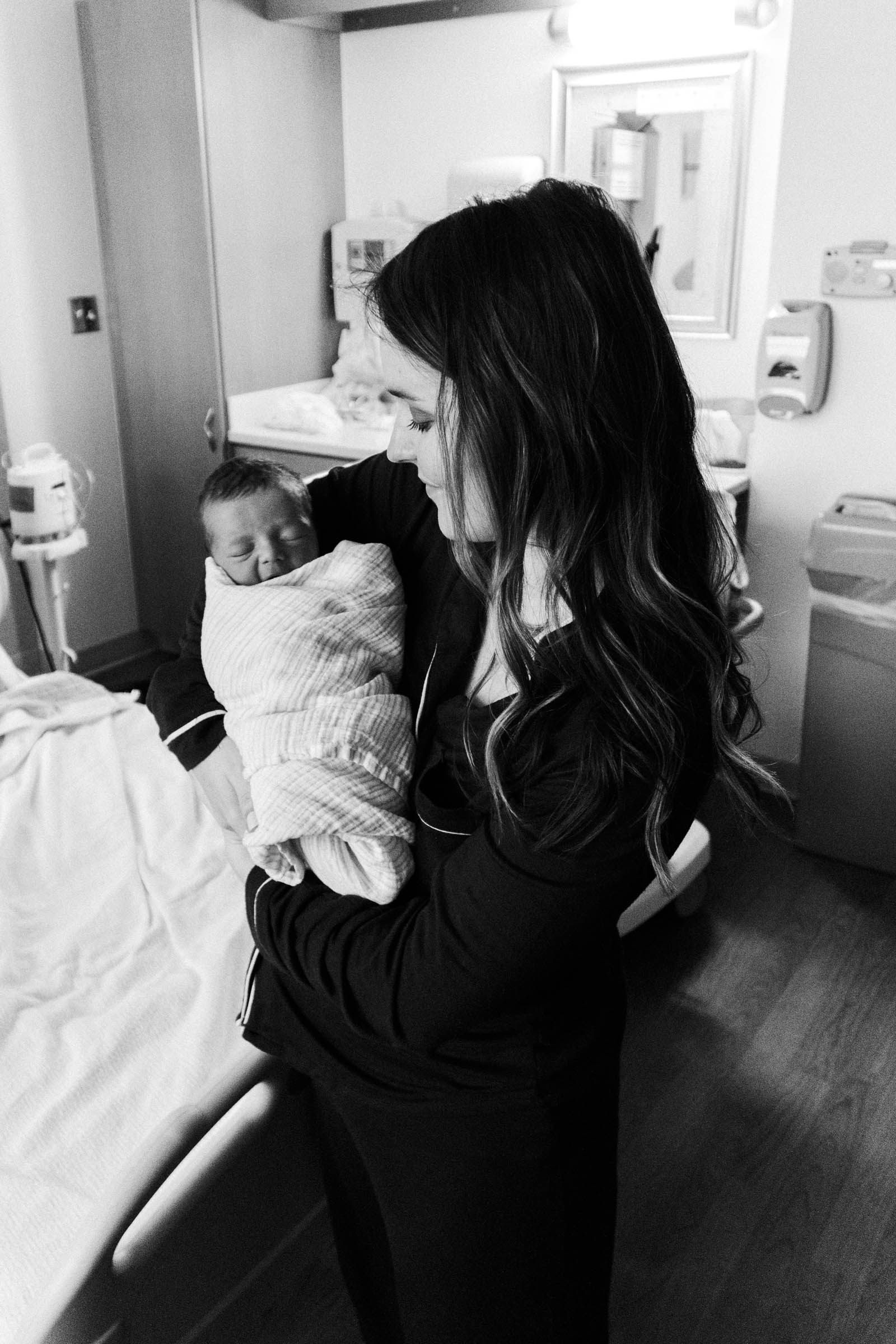 Good thing I packed my hospital bag the day before because on Tuesday morning, I got a call from the hospital saying they had me down for an induction that night!! I was surprised yet again because I thought I had a few days. I called and got the on-call PA to come in and cover my shift and I left work around 10:30am. Where do you think my first stop was? The nail salon, haha! I had been meaning to get a mani/pedi because it had been a while and I knew I wouldn’t have much time after the baby so I treated myself and took that time to relax. I went home and finished getting our things together, took a shower AND a lavender bubble bath.

Just as I was getting ready to lay down and rest, the hospital called asking if we could come around 5pm since they were having some “slow time.” I called Ryan and he finished up a meeting and picked up Viva Chicken for me to have as my last meal. We packed up all our things (definitely overpacked by the way) and headed to the hospital to have our baby! 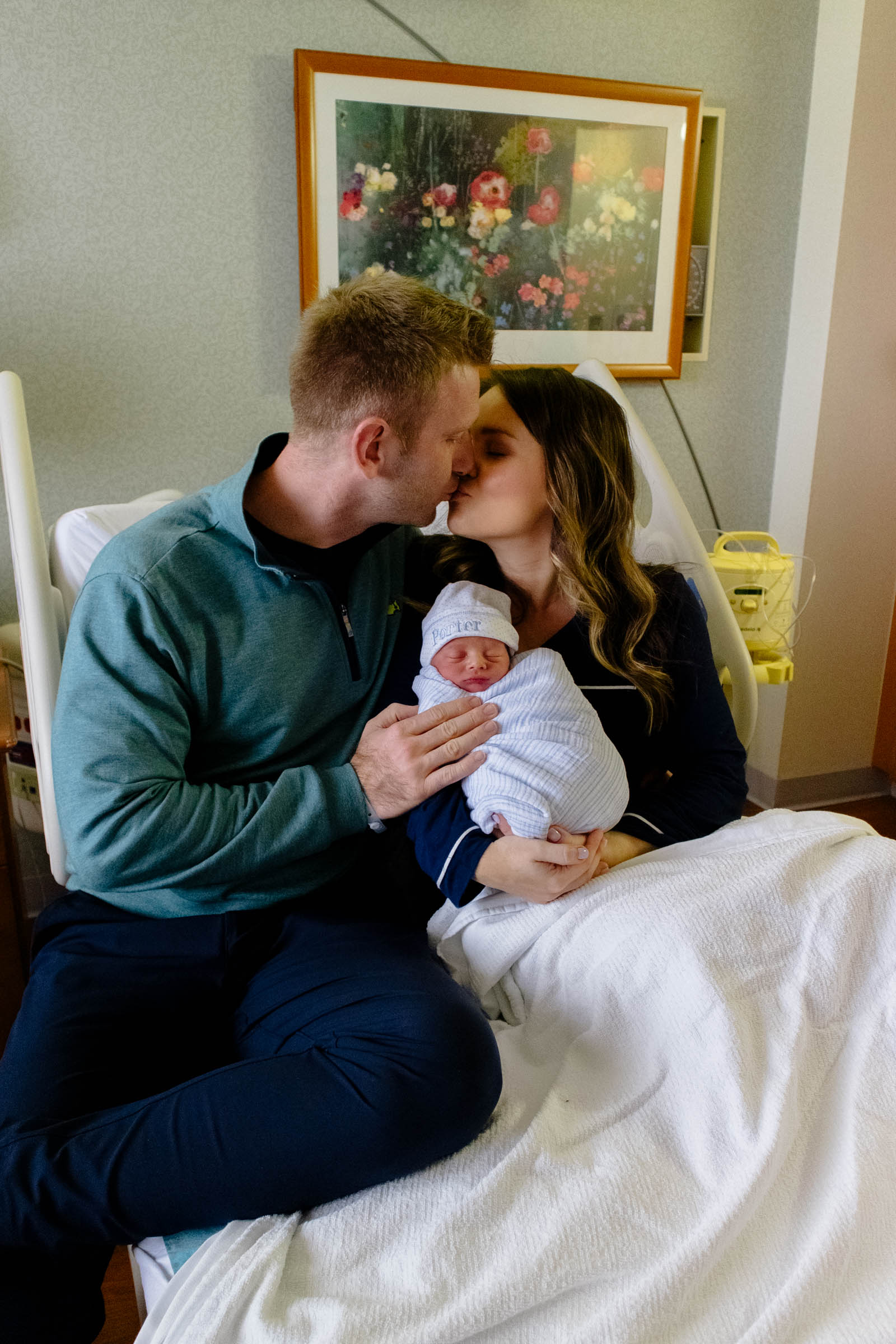 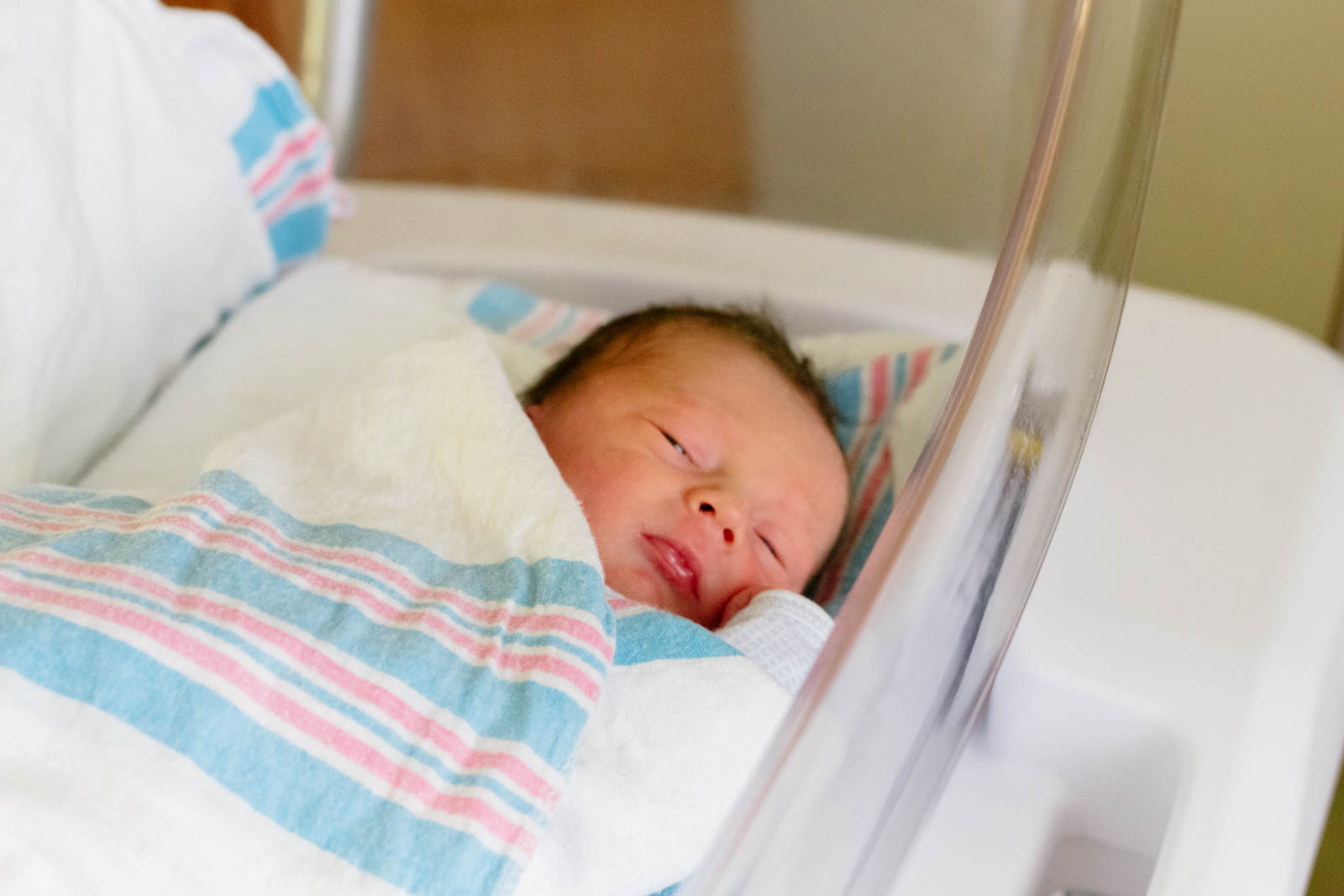 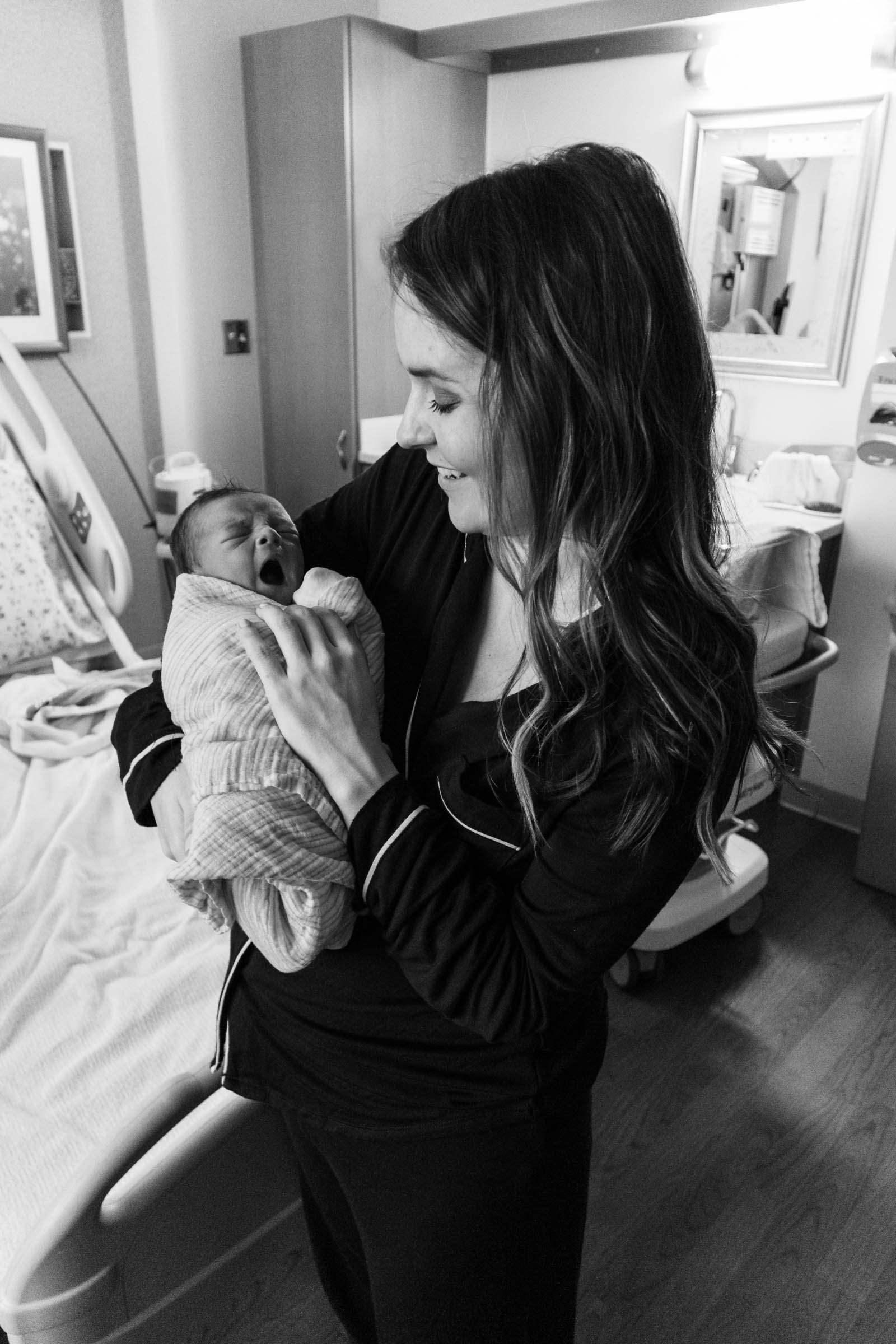 I guess the only good thing about the induction was that I could somewhat prepare for it, which was good for this planner. We checked in and met our nurse and got the IV started and blood drawn. I rotated through all the doctors at my practice but the ones on call the next two nights were ones I never met (they typically work at another location) but they were both so nice and did a great job.

To start my induction process they used a cervical balloon. I was about 1 cm dilated and 80% effaced but needed some help. The balloon was uncomfortable to say the least and as I was walking around the halls to stretch my legs, I started to get some mild contractions. Sleeping during an induction was not the easiest thing, especially with the balloon in place, the constant noise from the IV and the fetal monitor. The contractions got pretty intense so I got one dose of pain medication and something to help me sleep. I had the balloon removed about 4:45am and I want to say I was about 4cm at this point (can’t exactly remember).

The next morning around 10am the doctor broke my water which wasn’t painful, but the real contractions came about 30-45 minutes later. At this point I was like okay- time for the epidural! I was worried about sitting still during the contractions but my anesthesiologist was so quick and was able to place the epidural between contractions and suddenly I felt this warm sensation in my bottom half. Let me state for the record that I would never want to give birth without meds- those contractions were intense and I felt like I could be more present in the actual birth process without focusing so much energy on the pain. 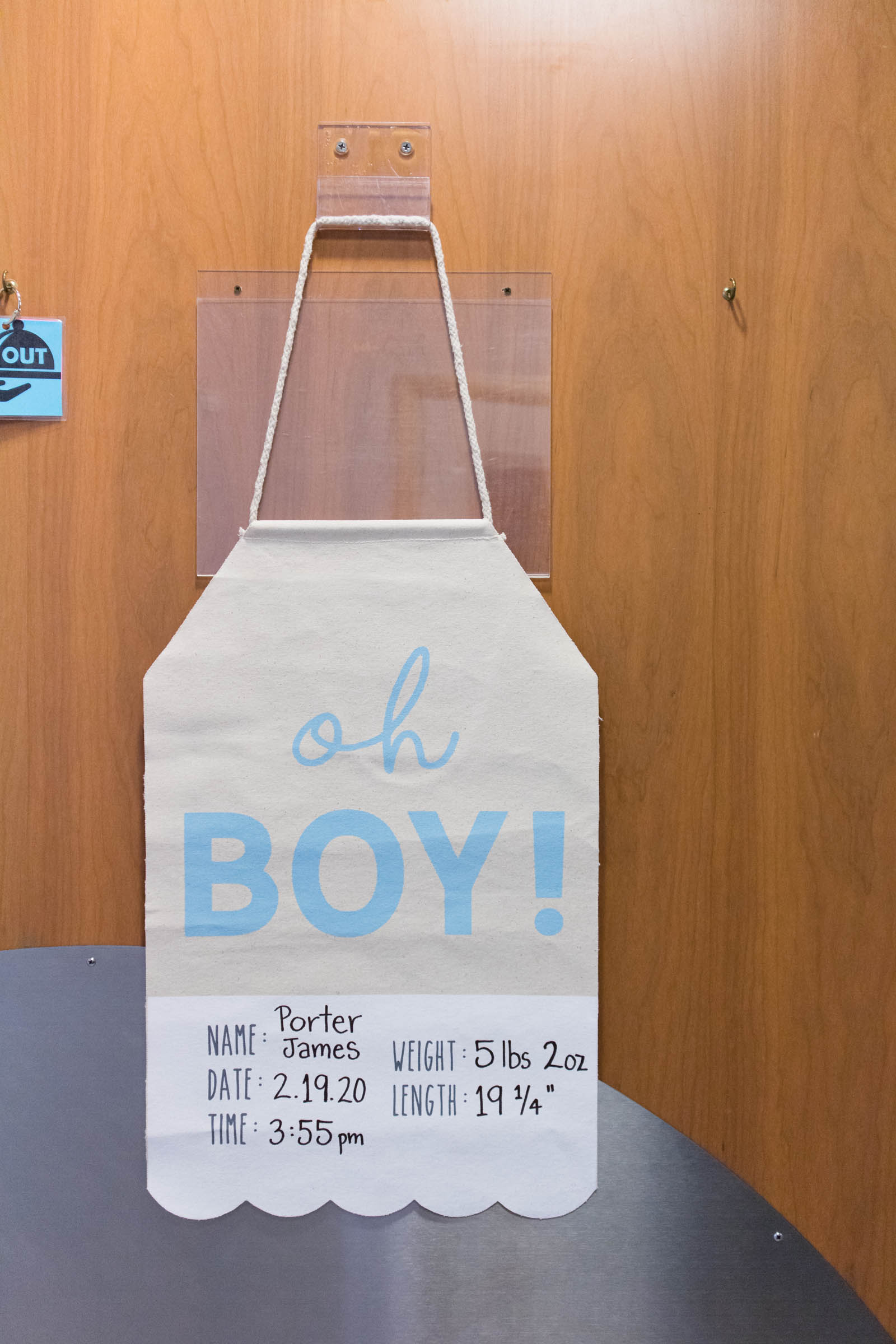 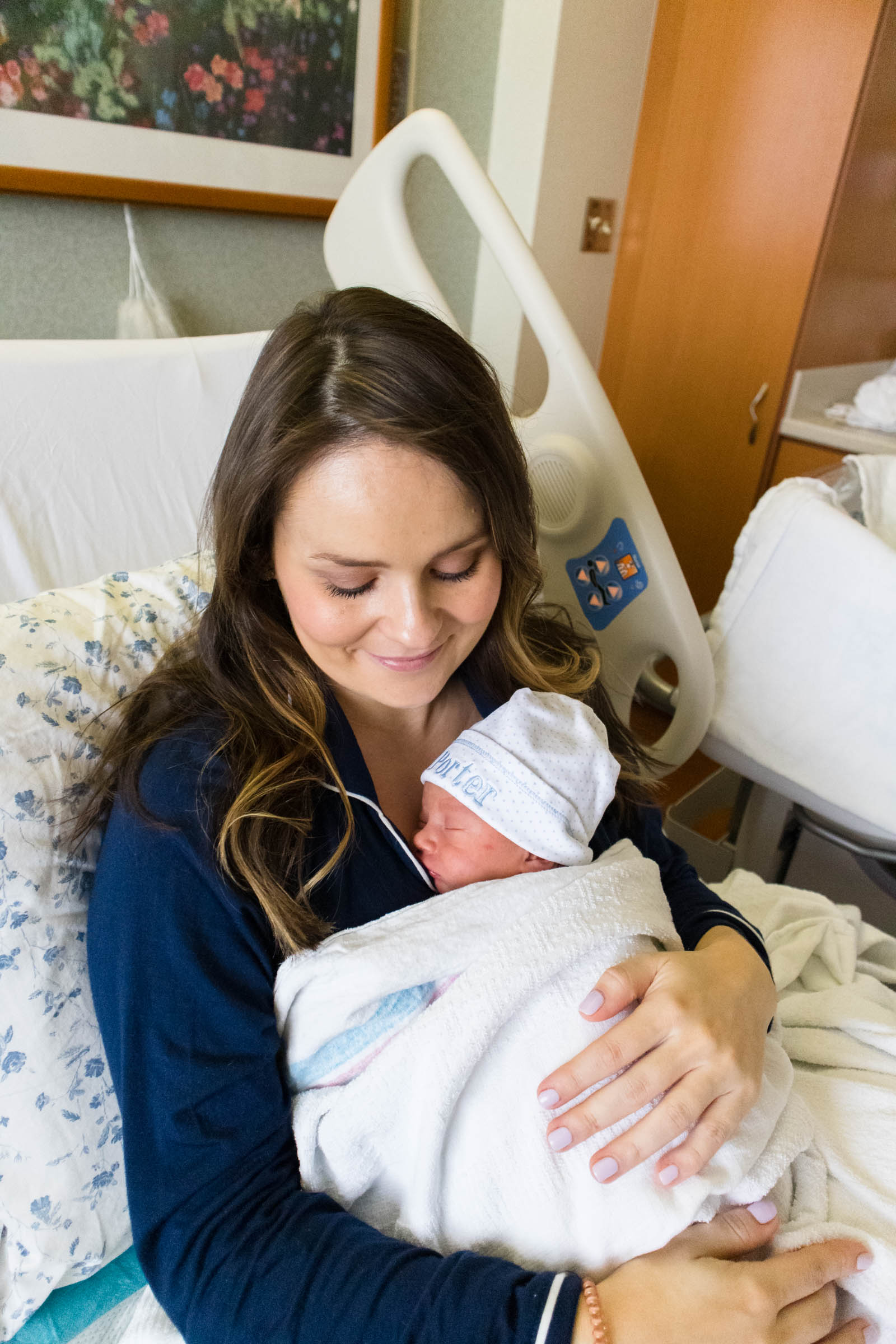 I started pushing around 2:25pm with the L&D nurse. They had me on a small dose of Pitocin then took me off because my uterus was contracting naturally but then the contractions were getting too far apart so they started the dose again. On my ultrasound earlier that week they said he had hair so I was eager to see and the nurse offered me a mirror (a giant mirror at that, on wheels lol). Ryan didn’t really want to see what was happening down there and I don’t blame him so the few times I looked in the mirror I just told him to look away! Baby’s heart rate was dropping slightly during the contractions (which is expected) but once he started getting lower in the birth canal, the doctor and baby nurses came in and it really felt like it was go time!! At the very end my doctor said she might have to use the vacuum to get him out quickly because of his heart rate unless I got him out with the next set of pushes. Because of this the NICU team was there on standby BUT luckily I pushed him out on my own and he joined us at 3:55pm!! No need for the vacuum or NICU team and he had an APGAR of 8. Since he was on the small side, I just wanted him to be healthy so when he had a good report I was so relieved. He was born at 37 weeks 4 days with a full head of dark hair. Our baby boy was finally here!! 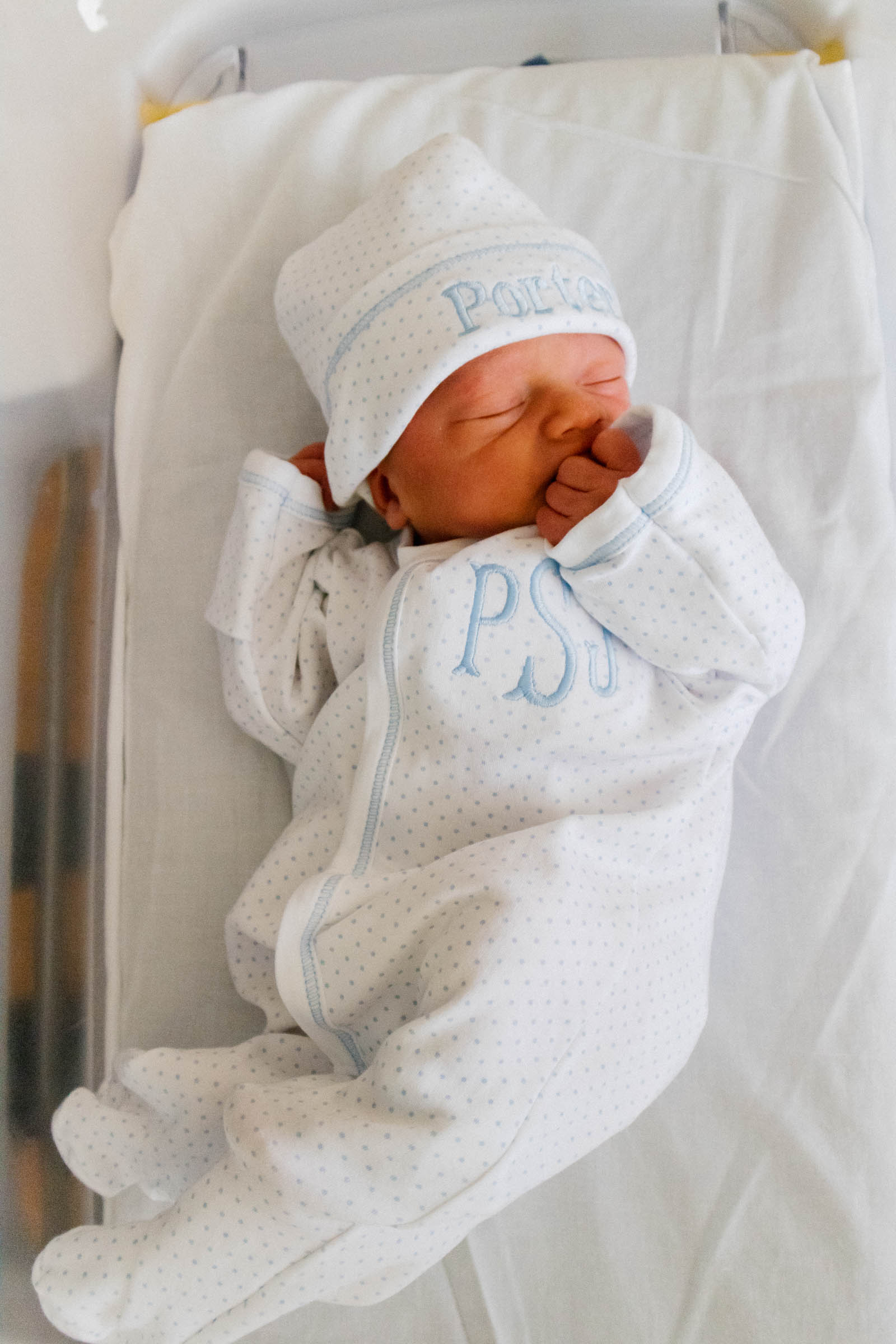 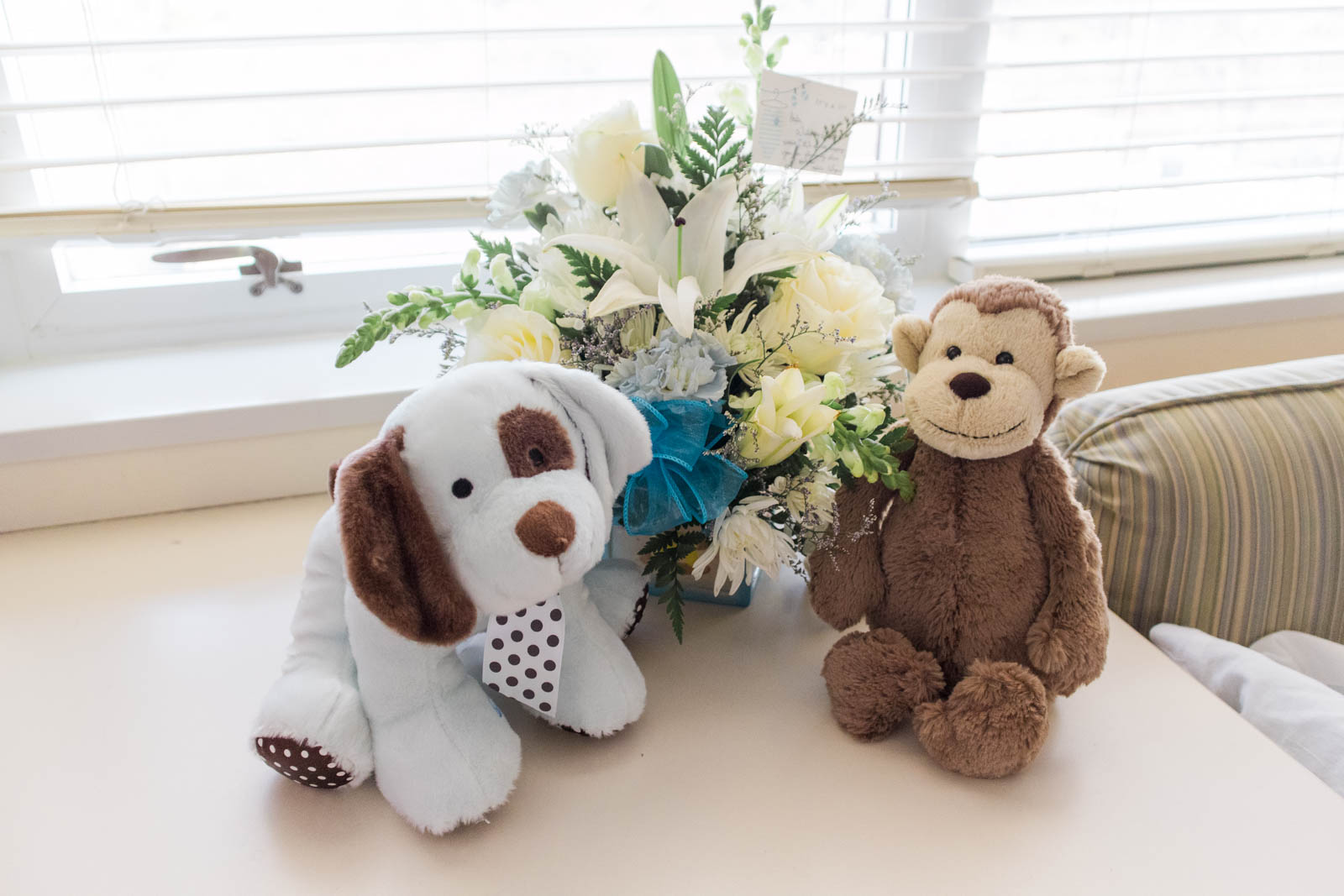 Including the night of induction, we were in the hospital 3 nights. Porter passed all the normal tests and the only extra things he had to do was get his blood sugar checked every 3 hours before feedings and have a car seat test. We had one slightly low blood sugar and had to give some glucose and higher calorie formula but other than that everything was fine! By day 3 we were ready to bust out of the place and take our boy home but overall, I had such a great experience at our hospital.

We didn’t officially announce his name until birth but we’ve actually had our boy name picked out for years! It’s kind of hard to remember when we first decided on Porter- I think Ryan had a friend of a friend who went by Porter but it was his last name. It just stuck and we love that it’s a little bit unique. James is his middle name and comes from Ryan’s side of the family. It is also his middle name and his mom’s maiden name. 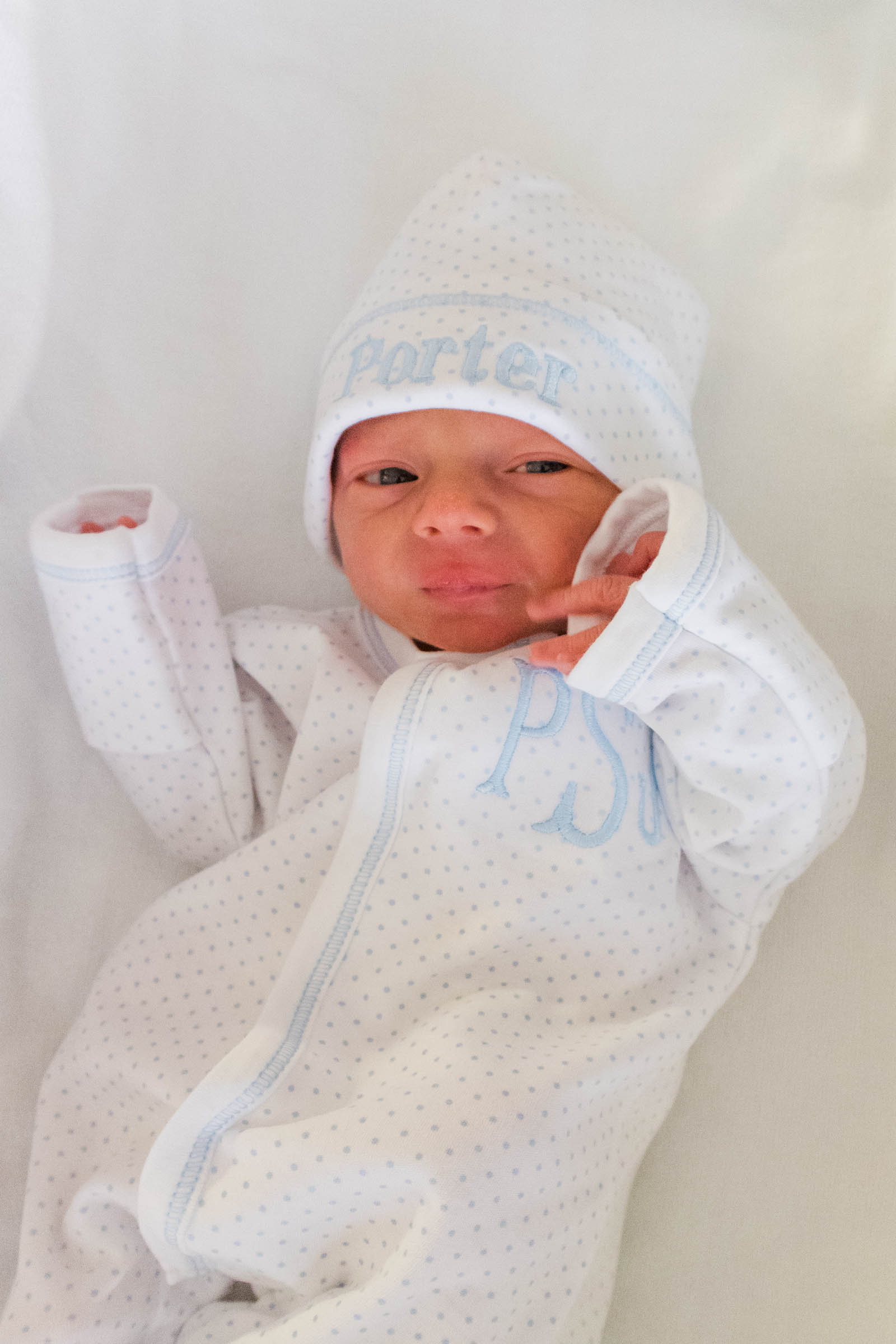 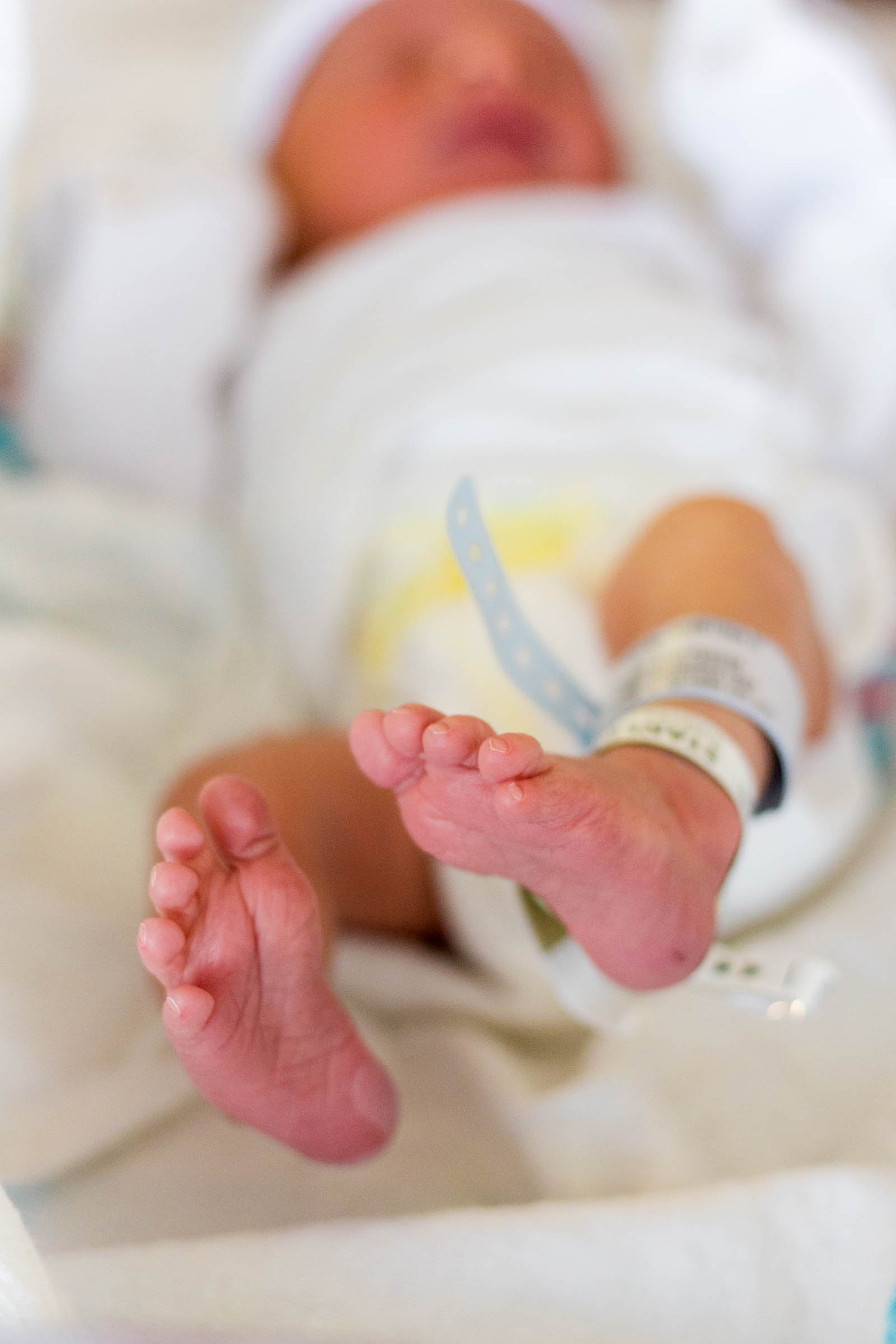 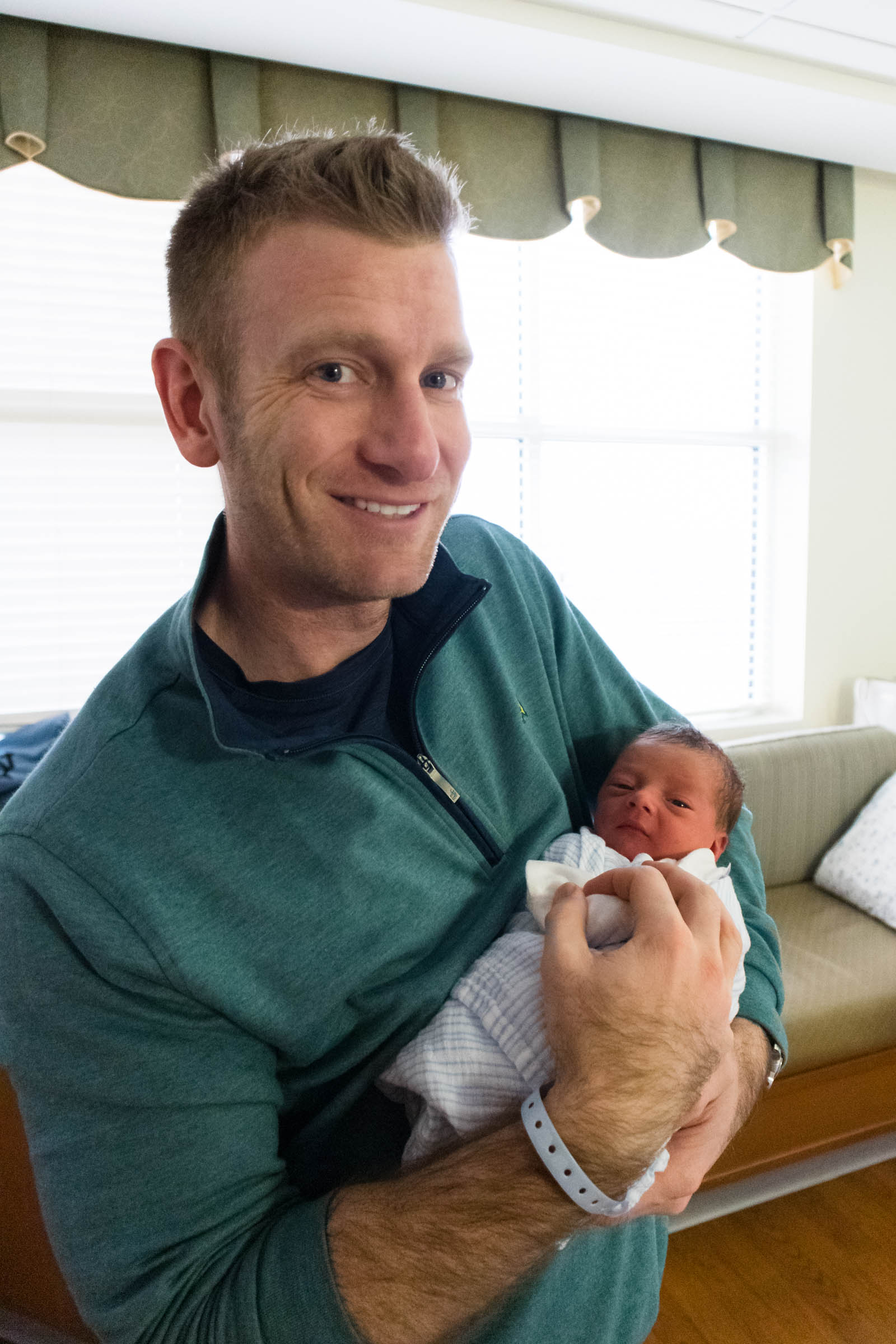 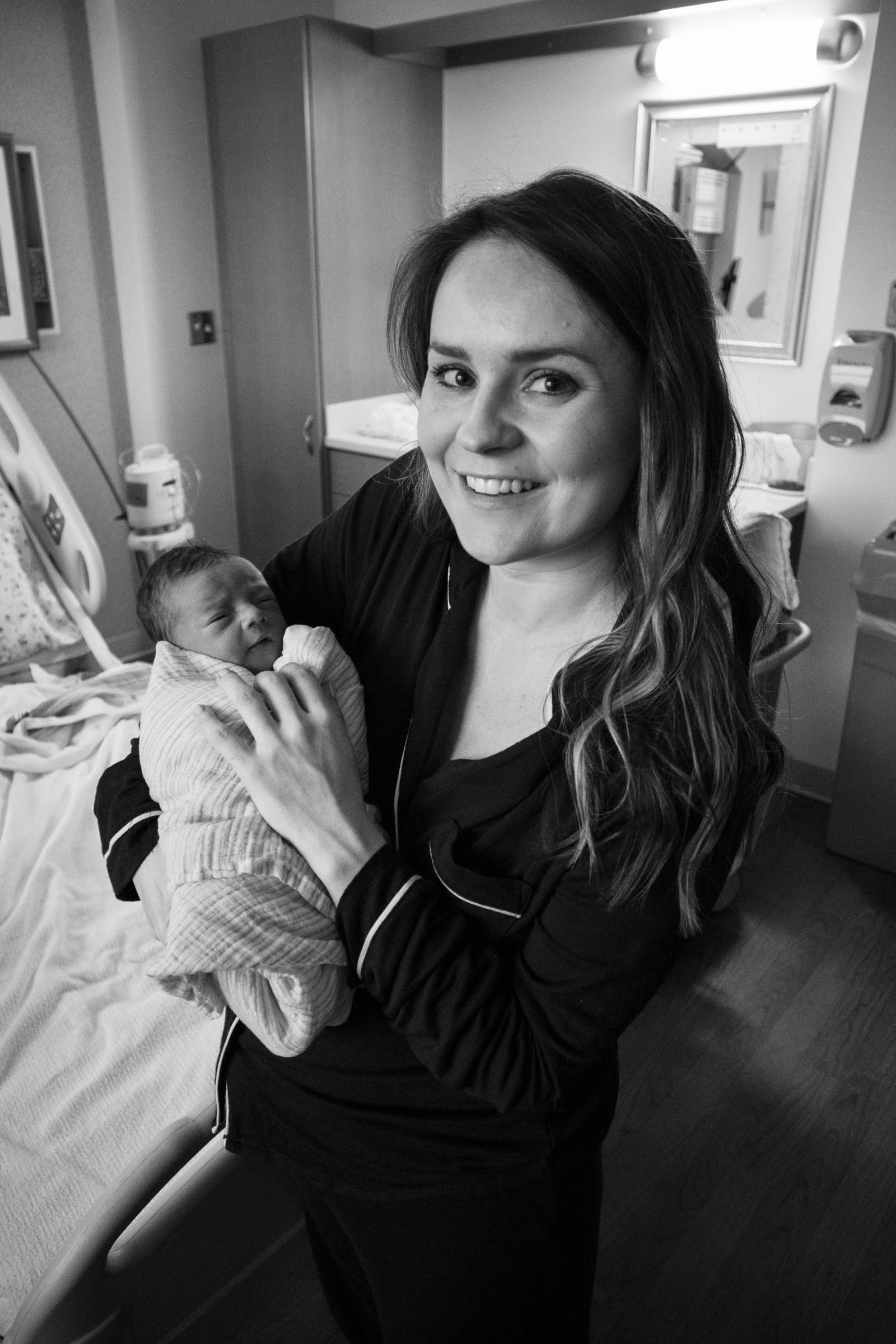 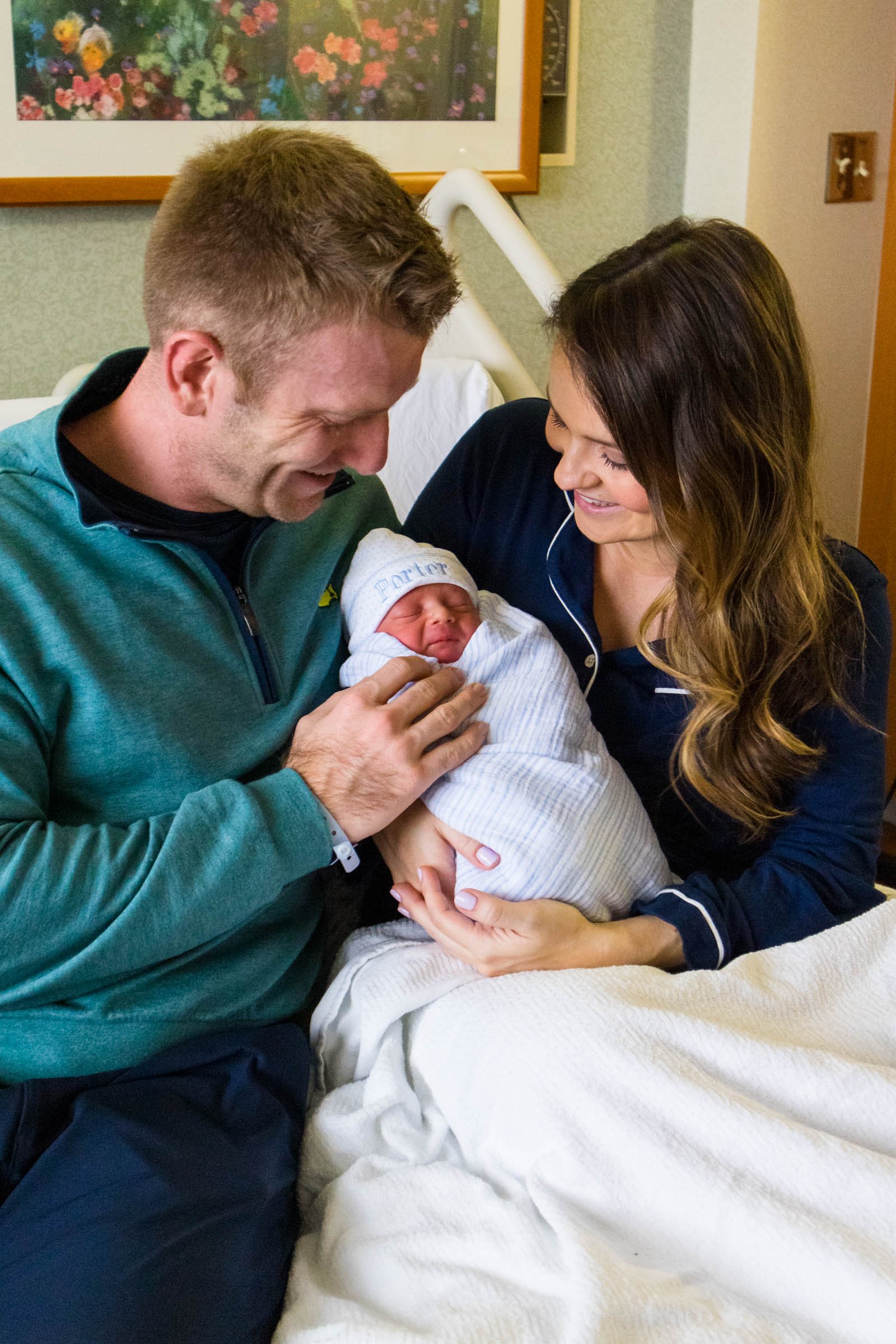 We love you Porter James and can’t wait to watch you grow!